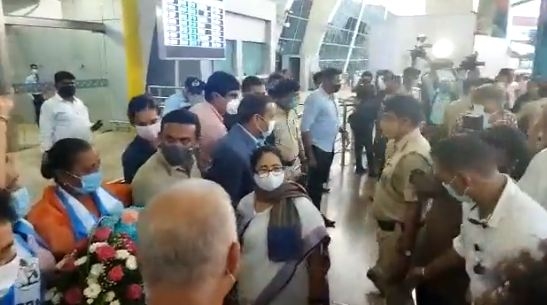 Trinamool Congress (TMC) Chief Mamta Banerjee arrived at Goa yesterday for her two day visit. She was well received at the Goa's Dabolim airport, with slogans and chants towards the TMC party and the leader.

Several well wishers and party workers gathered at the arrival gate of the Goa Airport to welcome TMC Chief to Goa on her two day visit. The people raised witty slogans that caught attention of passerby and netizens.

Take a look at the video, here:

With elections approaching in Goa, several political leaders are visiting and staging programmes at the Union Territory.

According to reports, The TMC has also identified Goa as one of the key states for expanding its footprints nationwide. The party is banking on former Goa Chief Minister Luizinho Faleiro, who joined the party in September, to make inroads into Goa.