New India Samachar is a well-designed and informative magazine which is especially a must read copy for history enthusiasts. Also, it is important of the social, economic, and political conditions of the past.

The government's bi-weekly publication released its first January 2022 edition to soon landup in a controversy. Why did the New India Samachar's latest copy get backlashes? As per several history scholars and learners, there seems to be a compromise made on facts from the past events. The criticism flooded with respect to the page that talked of the revolt of 1857.

The cover page holds dazzling image of Prime Minister Narendra Modi marking the AmritMahotsav celebrations. The pages inside have glimpses of the great participation of the common man in freedom movement which probably many have been forgotten. With the purpose to shift the spotlight on these anonymous freedom fighters, this copy came into being.

Flipping pages of the Amrit Yatra of New India, the reader shall come to the title, "Inspiration from History".

The text that caught attention and took to questioning facts read, "The Bhakti movement heralded the freedom struggle in India. During the Bhakti Yuga, the saints and mahants of this country, from every part of the country whether it is Swami Vivekananda, Chaitanya Mahaprabhu, Ramana Maharishi, were concerned about its spiritual consciousness. It served as the precursor to the revolt of 1857."

Take a look at the copy, right here: 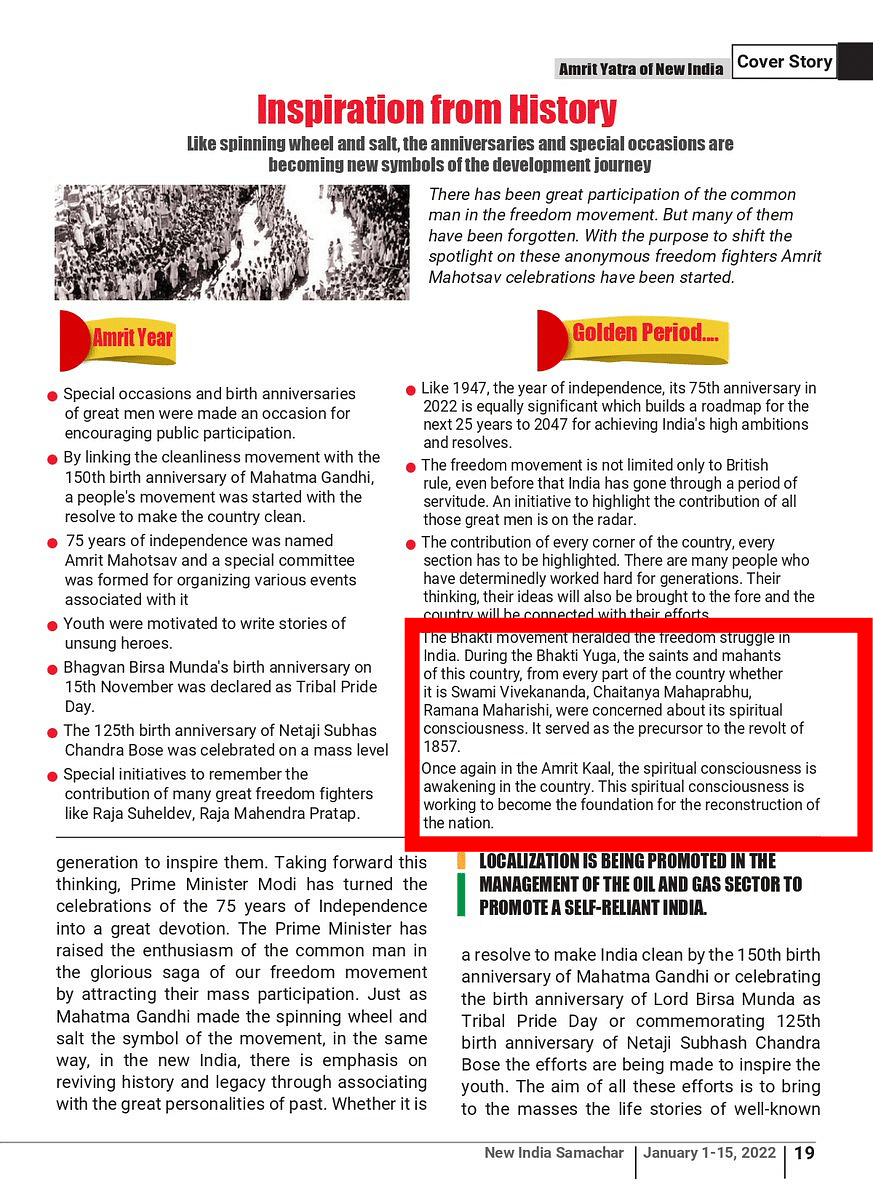 The highlighted paragraph mentioned of contributions of Swami Vivekananda and Ramana Maharshi to be a precursor to the revolt of 1857, though the two spiritual personalities were only to born after the 1857 revolt - leading alert netizens to raise questions on the compromised truth.

Talking to twitter, a fact check page wrote "Ulle banate raho (keep fooling)" and mentioned that Swami Vivekananda was born in 1863 while Ramana Maharshi only in 1879. Both years being post the historic moment of 1857. Thus, holding potential to a question the published information which speaks of them possibly influence the revolt of 1857.

No sooner a netizen took to hilarious reply, "Swami Vivekananda and Ramana Maharshi time-travelled to before 1857 to create a spiritual consciousness which acted as precursor for rebellion? Bravo..." While, several took to Twitter sharing memes to slam the New India Samachar, Indian Government's bi-weekly Online news Magazine, for misreporting facts from history.

Swami Vivekananda and Ramana Maharshi time-travelled to before 1857 to create a spiritual consciousness which acted as precursor for rebellion? Bravo 👏👏👏

Bhakti movement did what??🤡

2) Swami Vivekananda was born in 1863, Ramana Maharshi was Born in 1879 and Sepoy mutiny or revolt happened in 1856. None of them from Bhakti movement era.

@PIBFactCheck can you do your own fact checking pls. 😂. If not we can outsource this fact checking to @zoo_bear @AltNews @free_thinker Love beyond boundaries! Swedish woman flies to India to marry Facebook friend in UP