HomeUjjainMahakal corridor project: How this ambitious project will revive Rudrasagar Lake choked due to sewer lines?

Mahakal corridor project: How this ambitious project will revive Rudrasagar Lake choked due to sewer lines?

The Mahakal corridor project has revived Rudrasagar Lake which was nearly pushed into oblivion.

Sewer lines of colonies were dumping effluent into it, hyacinth overgrowth had choked the ancient waterbody and a foul smell emanating from it dented the image of the holy city of Ujjain. But, the Mahakal corridor project has revived Rudrasagar Lake which was nearly pushed into oblivion.

The lake, which finds mention in Skanda Purana, is located adjacent to the Mahakaleshwar Temple, and has been rejuvenated through meticulous planning and nature-centric urban policies, officials said.

The revival of Rudrasagar Lake is part of the ambitious Mahakal corridor project, whose first phase is all set to be inaugurated on Tuesday by Prime Minister Narendra Modi.

"When we started the project in 2017, there were many challenges and since it was a religious project, we had to really put all stakeholders together. One major challenge also was the Rudrasagar Lake which had turned into a sewer and we created a proper sewer network and made it free from the sewer," Chief Executive Officer of Ujjain Smart City, Ashish Kumar Pathak, told PTI.

Ujjain is an ancient and holy city and old Hindu texts describe the presence of a 'Mahakal Van' around the Mahakaleshwar Temple aeons ago, '84 Mahadev', 'Nava Graha' and 'Sapt Sarovar' (seven lakes) in the city, one of which is Rudrasagar.

"For maintaining a perennial flow of water in it, the lake has been connected to Kshipra River with a channel, and new Mahakal corridor on one side, and lakefront development on the other side will also boost not just the number of devotees visiting the ancient temple, one of the 12 'jyotirlings' in the country, but also flow of regular tourists to Ujjain," said Pathak who executed the project.

Chief Minister Shivraj Singh Chouhan on Sunday evening took stock of the preparations underway for the mega event on October 11, and also spoke of the revival of Rudrasagar.

"What we had envisioned for this project, the results are much higher, more amazing, and unimaginable, and it is a work which is about the cultural resurgence of India.

"And, after the Prime Minister dedicates 'Mahakal Lok' (corridor) to Lord Shiva, people should pick water from their villages and reach 'Mahakal Lok'," he said.

"Rudrasagar which had almost vanished, and just mud was left in it, has now been revived. So, pick water from wells, baolis and other places in villages, and offer it to Rudrasagar, and see 'Shri Mahakal Lok'," he told reporters at the site of the corridor.

Read Also
Ujjain: Inauguration of ‘Shri Mahakal Lok’ on October 11; elaborated preparations are on in view... 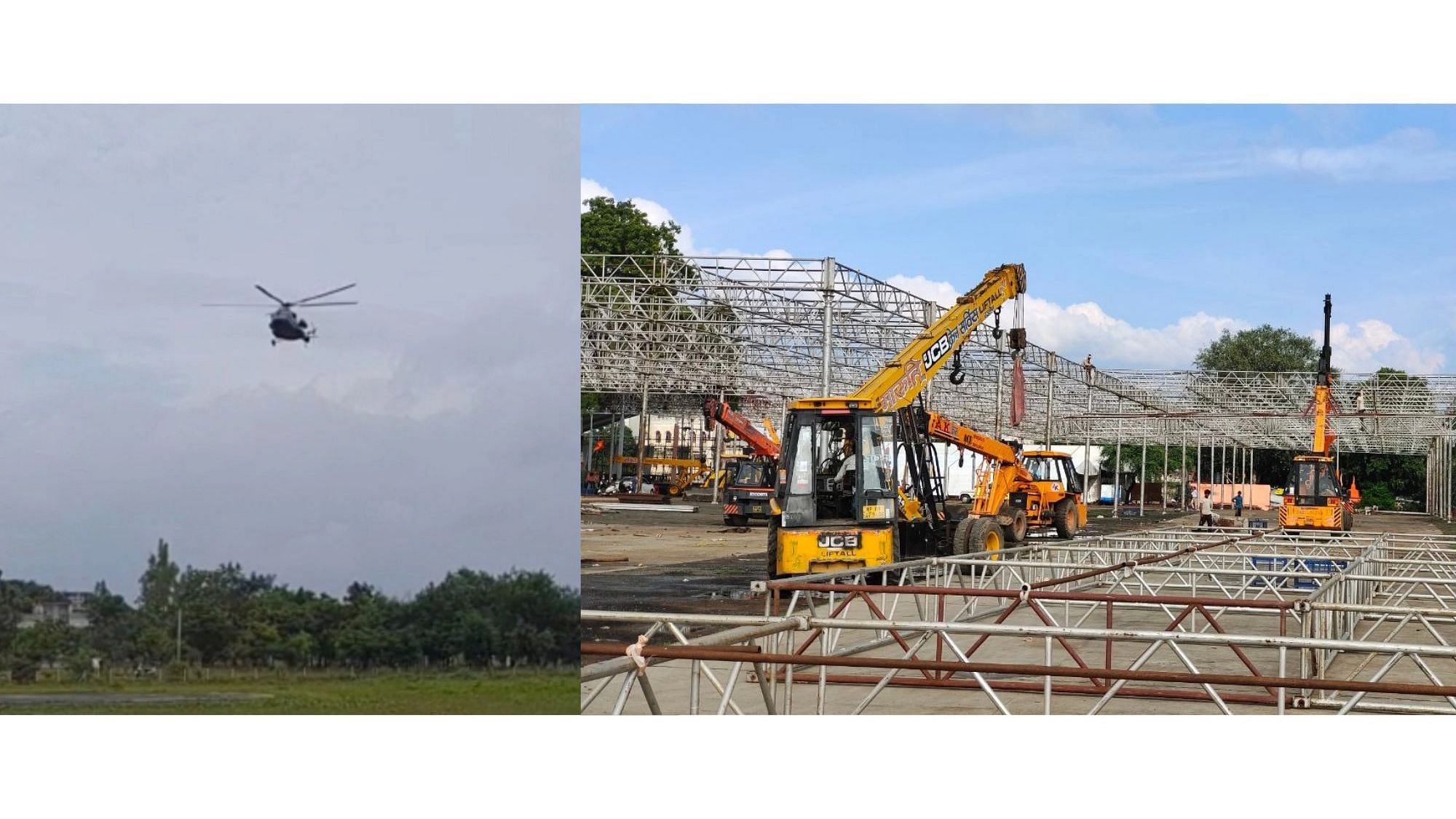 Rudrasagar Lake, currently spread over 17 hectares, is surrounded on two sides by the temple complex and the newly-built corridor, a wide road on one side and rows of houses with a roadway in front on the fourth side.

A bridge from the wide road connects it to an island in the lake -- Vikram Tila -- that is said to be associated with the legend of King Vikramaditya and his 'Sinhasan Battisi'.

"The Rudrasagar Lake consists of Bada Rudrasagar and Chhota Rudrasagar. Revival of the lake is being done as part of phase two of the project, which is already underway, as the first phase is set to be inaugurated on October 11," a senior official, associated with the project since its beginning, told PTI.

"We have already rescued and revived the Bada Rudrasagar, and soon work will begin on Chhota Rudrasagar too. For rejuvenation of the waterbody, we had to do dewatering, dredging and desilting to bring it back to life after years of its abuse," he said.

A rooster island has also been created for birds in the middle of the lake, he added.

"For ensuring the cleanliness of Rudrasagar, as part of the project, sewer lines which were deposited into it from multiple sides, were connected to a stormwater drain which in turn has been linked to an STP (sewage treatment plant). The drain was earlier open, but now it has been covered which has also put away the foul smell that used to emanate," he said.

"Besides, a solid waste garbage screening mechanism has been installed near the lake on the side of the corridor, which stops plastic and other waste material from entering the lake. The idea was to let the glory of Rudrasagar return that had turned into a virtual drain," he said.

The Chhota Rudrasagar Lake on the other side of the wide road that separates it from Bada Rudrasagar Lake is still covered in hyacinth overgrowth and stands in stark comparison to the bigger revived portion which till a couple of years ago had suffered the same fate.

The ambitious corridor project seeks to "emphasise and re-evoke the ancient glory of the historic city of Ujjain", government sources have said.

'Mahakal Lok' development also includes a mid-way zone, a park, a multi-storied parking lot for cars and buses, florists and other shops, solar lighting, a facility centre for pilgrims, a water pipeline and sewer line, among other works.

A light and sound system has also been developed, and a plan is also to have a musical fountain show using the Rudrasagar Lake as a backdrop, they said. 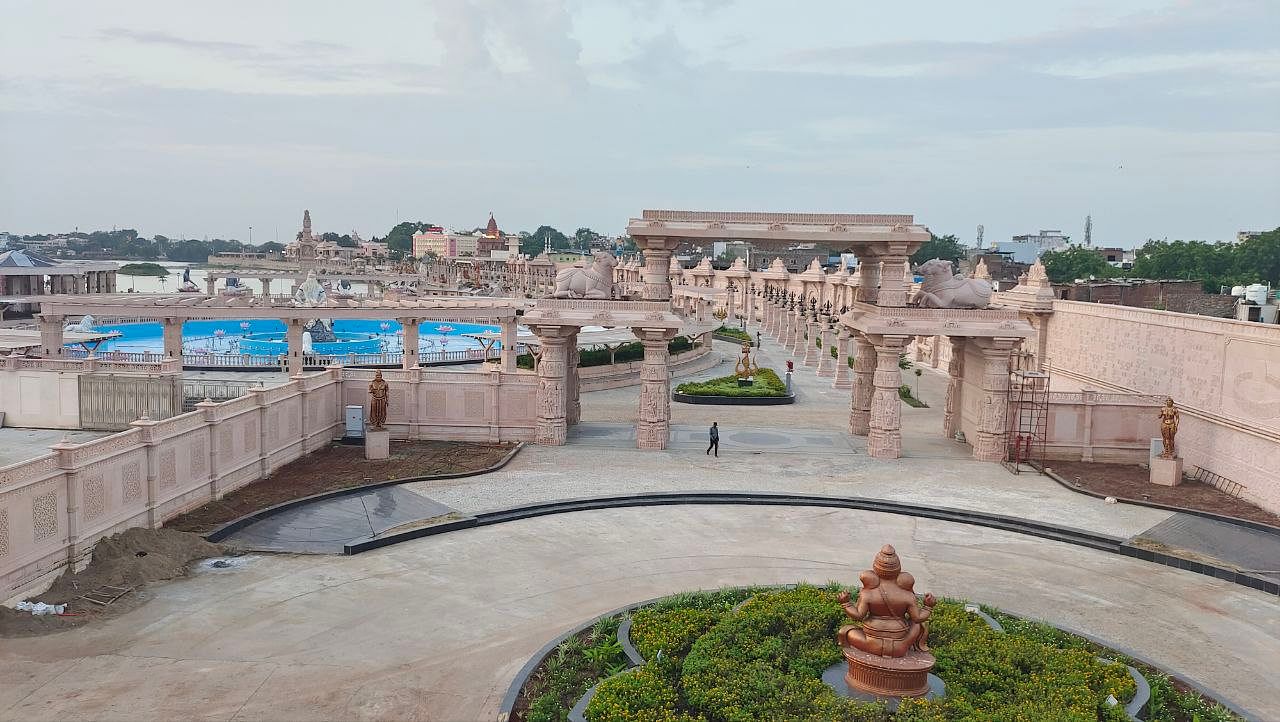