According to patwari Dheeraj Nigam, houses and shops have been built by the encroachers on the government land of Govardhan Sagar in government records

Ujjain (Madhya Pradesh): Initiating big action, the Ujjain Municipal Corporation (UMC) staff in the presence of a heavy police force launched the removal of illegal construction on the land of mythological Govardhan Sagar pond on Wednesday. The UMC has started a campaign to remove the construction made on Sagar’s survey number 1281 considering it illegal. According to the revenue department, about 92 illegal constructions built on the land of Govardhan Sagar will be removed.

In recent days, the court had considered survey number 1281 as government land, after which the UMC had issued notices to the builders on this survey number. There was massive encroachment on the land of Govardhan Sagar. A colony, market and marriage home to nurseries and gumtis were set-up on the land of Sagar. The action initiated by the UMC created a stir among the people of the area. Govardhan Sagar was spread over about 36 bighas. Presently Govardhan Sagar has been limited to 24 bighas only.

According to patwari Dheeraj Nigam, houses and shops have been built by the encroachers on the government land of Govardhan Sagar in government records. A total of 92 houses and 28 shops are coming under encroachment. The encroachment of a total of 28 shops, from the nursery near the Hanuman temple in Budhwaria to the pottery shop in front of the Sheetla Mata temple on the same road, is to be removed. After this, 9 houses of Ganesh Tekri located near Nagarkot Mata Mandir will also be razed and the government land will be freed from illegal occupation.

There were two barber (cutting) shops of Prabhu Dayma, Dilip’s garage and Rais’s refrigerator shop on the side of Govardhan Sagar’s Budhwaria Road. Similarly, apart from other people’s hotels, eateries and nurseries were also being operated. The shopkeepers said that for the last 20 years they were doing business by building tin shed shops. In the past, slips were cut by the UMC, but after a few years the receipts have also stopped. According to the shopkeepers, the announcement was made by the UMC on Tuesday afternoon. Notice was not given, due to which the goods of the shops were started to be collected from the night itself. There have been encroachments but after the proper measurement of the area, it has come to the fore that most of the area seems to have encroached. These includes the road behind the city court and the road going from the Nikas Chouraha of Ankpat Marg is also coming within the boundary of pond land, while there is encroachment even on the charitable one. Apart from this, people have encroached on the side of Patel Nagar till Bhanushali Dharamshala by building houses.

On the other hand, landowners have encroached on many places, including an entire strip of Vikramaditya Cloth Market and the back side of Nirmal Sagar Talkies, in the strip at the end of Khedapati Hanuman Temple and have built shops and houses there.

A hearing is also going on in the National Green Tribunal (NGT) regarding the land of Govardhan Sagar. The NGT has also accepted that the pond is owned by the government. On the other hand, the ADJ court in its decision had also issued orders to consider pond’s land survey number 1281 as government land. Following this order, collector Asheesh Singh instructed the UMC to remove the illegal occupants and encroach on the pond’s land. After this, about 92 people were given notices by the UMC regarding the construction on the pond’s land. Most of the people operating the shop by encroaching on Govardhan Sagar-Budhwariya Marg were seen removing their goods voluntarily without any dispute.

When the administration team reached the pottery shop, the shop operator present here started arguing. They said where would they go with their goods in such a short time. When the dispute escalated, the police caught the vendors and brought them to the Chimanganj Mandi police station. A police force of five police stations was deployed to manage the security and traffic during the operation to remove the encroachments being done jointly by the administration and the UMC team. Apart from Chimanganj Mandi police station in-charge Jitendra Bhaskar, women police station in-charge Rekha Verma and other police officers were stationed here with the force. 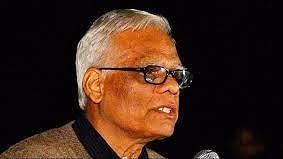