The sources claimed that the MPPSC was under pressure from state government to relieve incharge exam controller Ravindra Panchbhai and Punekar.

Sushant Punekar who was deployed in the special cell for state eligibility test (SET) at MPPSC has been relieved. This is the first action taken against any official after the examination. Free Press had earlier predicted that MPPSC would act against two officials including Punekar to suppress the controversy that erupted as objectionable passage featured in state service exam.

The sources claimed that the MPPSC was under pressure from state government to relieve incharge exam controller Ravindra Panchbhai and Punekar. The MPPSC did not take action against Panchbhai as he is one of the petitioners in SSE 2019 case.

When contacted, Punekar said he was relieved from MPPSC as there was no utility of him in the Commission. “SET exam is not scheduled in 2020, so I was relieved. I am expecting my new posting in a day or two,” he added.

MPPSC exam was held on January 12 in the state. The exam carried a passage on which five questions were based. The passage had allegedly described Bhil tribe as alcoholic and criminal-minded.

Justice SC Sharma passed the order on a petition filed by Choubey, Pant and exam controller Ravindra Panchbhai after an FIR was registered under SC/ST Act against MPPSC officers.

The petitioners’ counsel VP Khare told court that question paper is set by paper setter while another person is a moderator.

Khare also placed reliance upon MP Public Service Commission Rules of Procedure 2019, Rule 15, which provides that no suit, prosecution or legal proceedings shall lie against the commission, chairman, member, the secretary, the controller of examinations and the officers or any other persons deputed to assist the commission in the matter of examination.

After listening to both the parties, the court directed police to restrain from taking any action against petitioners or other members, officers or employees of MPPSC till the next hearing on February 24. 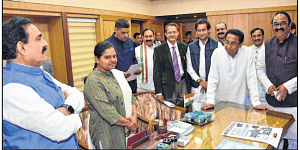