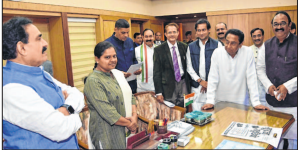 Later Ram Dangore of BJP also raised the same issue demanding action against the guilty that would set an example so that such mistakes are not repeated.

Minister Govind Singh intervened and said that CM has already given instructions for strict action against the guilty. Some more facts have emerged and appropriate action is being taken.

However, soon MLAs started discussion on whose party did more for welfare for SC/STs. BJP sighted example of PM Modi washing feet of sanitary workers during Kumbh mela. Congress retaliated by asking why did your leaders ask to hold ‘review of constitution’.

Leader of Opposition and other BJP members also raised issue of protesting guest scholars. Congress promised it in its vachan patra but is now backtracking. There was a fire in their tents, said Narottam Mishra.

Higher education minister Jitu Patwari said that recruitment of professors was done after 30 years to bring quality education in colleges. Still, government will take care not to remove any guest scholar from their job.