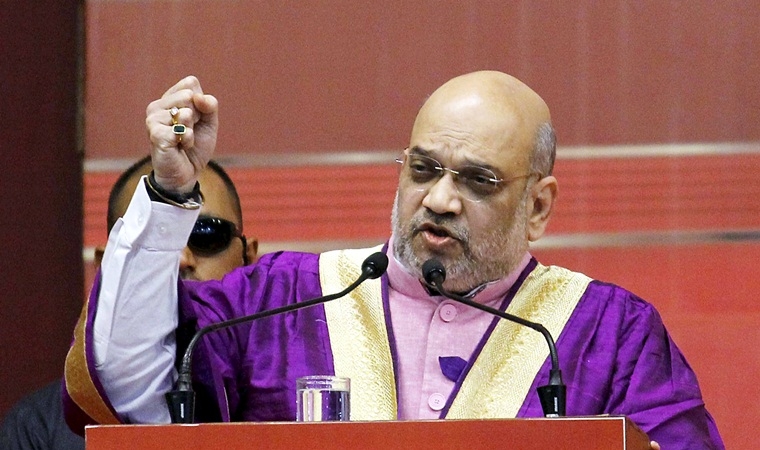 Gandhinagar: Prime Minister Narendra Modi took a firm decision and made Jammu and Kashmir an inseparable part of India in "one go", Union Home Minister Amit Shah said on Thursday, referring to the Centre's historic decision to revoke the border state's special status and bifurcate it.

Under Modi's leadership, the country has not hesitated in taking decisive steps against terrorism, he said. "Prime Minister Narendra Modi does not take decisions just to please people. He takes decisions which are good for them. "And he has the courage to pay the political price for taking such decisions. He has won the trust of 130 crore citizens," said Shah. The home minister was speaking at the 7th convocation of Pandit Deendayal Petroleum University (PDPU) here. "No one had thought in the past that an Indian leader can lead the world. There was a notion that India can not do those things which are not approved by other countries," he said. Shah said with the 2016 surgical strikes and the 2019 airstrike, India's took decisive action against terrorism. "For many years, India did not take decisive steps against terrorism. But, when the Uri attack happened, we conducted surgical strikes. We gave a message that though we fully believe in peace, no one can play with our security.

"Similarly, we retaliated with airstrike after the Pulwama attack and conveyed that no one can play with our boundaries," he said. "Since years, people of this country wanted to see Kashmir becoming an inseparable part of India. Abrogation of Articles 370 and 35A was a big challenge in realising that dream. But, no one was ready to talk about it. "And then, our PM scrapped those provisions in one go and made Kashmir an inseparable part of India in true sense," said Shah.

He exuded confidence that Kashmir, which according to him, was deprived of development and other essential services such as education and health all these years, would now scale new heights under Modi's leadership. "Kashmir was deprived of development. People of Kashmir were suffering from unemployment and poverty. But now, I am confident that under Modi's leadership, new industries will come and tourism will also flourish, which would create employment opportunities.

"People will also get proper health and education services," said Shah. In his address, PDPU president and noted industrialist Mukesh Ambani praised Shah and termed him as the "Iron man of our age". "Amitbhai, you are a true karmayogi. You are the Iron Man of our age. Your energy and focus always amazes me. Gujarat, and now India, are blessed to have an inspiring leader like you," said Ambani. Over a 1,000 students were given degrees at the convocation ceremony.