As part of the plans, sirens will blare out at 12 noon across the country, the national anthem will be played everywhere and all people and vehicles will come to a standstill.
IANS 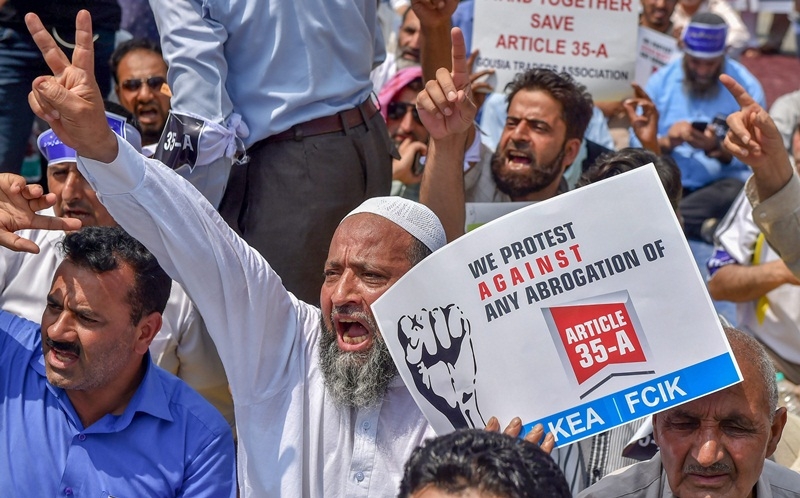 Islamabad: Pakistan on Thursday announced elaborate plans for the observance of 'Kashmir Hour' on Friday.

As part of the plans, sirens will blare out at 12 noon across the country, the national anthem will be played everywhere and all people and vehicles will come to a standstill. Even school children have been directed to join the protests in support of the people of 'Indian Occupied Kashmir'.

Prime Minister Imran Khan, the Chief Ministers along with parliamentarians will lead the nation for Kashmir Hour by coming out in front of their respective secretariats and office buildings, Radio Pakistan announced.

Special prayers for the people of Kashmir would also be offered after the Friday prayers.

"The whole of Pakistan will express solidarity with the people of 'Indian Occupied Kashmir' (IOK) on Friday from 12 to 12:30 p.m.," said Major General Asif Ghafoor, Director General of the Inter Services Public Relations.

Imran Khan tweeted: "We must send a strong message to Kashmiris that our nation stands resolutely behind them. So I am asking all Pakistanis for half an hour tomorrow stop whatever you are doing & come out on the road to show solidarity with the Kashmiri people."

In Pakistan's Punjab, the school education department has directed that all school children will stand outside their schools and the employees of administrative offices will converge at all focal points determined by the district authorities.

Besides, special Friday prayers will be held for the Kashmiri people, it directed. Public rallies will also be held with Pakistani and AJK flags from 2 p.m. to 5 p.m., the directive from the school education department of the Punjab government said.

In his message, Ghafoor appealed to the youth, particularly students, to take part in the Friday initiatives. Pakistani national heroes, people from the entertainment industry and media representatives would be among those showing solidarity with the Kashmiris, he said.

Special assistant to the Prime Minister on information, Firdous Ashiq Awan, said that Pakistan will give a "strong message to the world by expressing solidarity with the people of occupied Kashmir on Friday."

She said that people will come out at noon and stand for three minutes to express solidarity with the Kashmiris.

In a tweet, Firdous shared a detailed programme on the observance, according to which traffic will be halted for half an hour. If the Parliament is in session, a gathering will be held outside the PM's office on Constitution Avenue; the main spots for the protest will be identified in all districts; Deputy Commissioners will coordinate the plans; and public representatives will observe protests in their respective constituencies.

The official twitter handle of the ruling Pakistan Tehreek-i-Insaaf said: "Tomorrow at 12:00 pm, entire nation will be out in streets on the call of PM @ImranKhanPTI to show Kashmiris that Pakistan is with them through thick and thin #KashmirHour."