HomeIndiaFrom attacking Prashant Bhushan to getting a BJP ticket: The rise of Tajinder Singh Bagga

From attacking Prashant Bhushan to getting a BJP ticket: The rise of Tajinder Singh Bagga

Tajinder Singh Bagga – who was left out of the first list by BJP leading to much mirth among his opponents – was handed a ticket by BJP to contest from the Hari Nagar seat.

The received wisdom across the aisle – barring some who still rely upon Google trends to predict elections – is that AAP is going to sweep the Delhi Election 2020.

Right-wing publication Swarajya already has a piece on what BJP can learn from Kejriwal, and early-bird polls give AAP anything between 54-64 seats in the 70-seat assembly.

The BJP’s Delhi handle appears to have given up any hope of a contest and is content on sharing old Artist vs Art memes, some of which are blatantly communal.

But everyone who has been on social media over the last decade will be watching one ticket holder with keen interest. In a case of social media fame finally catching up win the real world, raconteur Tajinder Singh Bagga – who was left out of the first list by BJP leading to much mirth among his opponents – was handed a ticket by BJP to contest from the Hari Nagar seat.

Bagga had been roundly mocked for not getting a ticket during the first round with his Twitter nemeses going to town, joking that the only ticket he got was a cancelled one for Chapaak.

Who exactly is Tajinder Singh Bagga?

For the uninitiated, Bagga has been notorious in the capital’s political firmament, fomenting trouble from place to place. In 2011, before he was officially part of the BJP, he led an organisation called the Bhagat Singh Kranti Sena and attacked SC advocate Prashant Bhushan tweeting proudly: “"We hit Prashant Bhushan hard in his chamber in Supreme Court. If u will try to break my nation, I will break ur heads.”

He had been detained for the incident. The incident had been condemned by a host of senior BJP leaders including LK Advani and Rajnath Singh and Bagga even claimed he had left the BJP’s youth wing to foment trouble from outside.

By 2015, Bagga had risen enough to be one of the 150 social media influencers who met PM Modi at his official residence and in 2017 he was made Delhi spokesman.

Over the years, Bagga has gotten what Margaret Thatcher called the ‘oxygen of publicity’, dominating Twitter feeds which these days tend to become mainstream news. He also eschewed threats of violence with juvenile social media mocking often writing stuff like: “Leftists are terrorists. Leftists murdered millions.”

Despite being debunked, the tweet continues to be RTed on his social media feed.

Umar Khalid had slammed him saying: “Find a better lie.”

Bollywood actor Sonam Kapoor had also slammed him for the video, saying ‘shame wasn’t in his DNA’.

Earlier, he was in the news for selling Kashmir Human shield t-shirts. The incident which shocked the nation when a Kashmiri was tied to a jeep by Major Gogoi, even though the instance of human rights abuse became a cause celebre among the right.

Bagga defended the t-shirt which had the slogan: “Indian Army saving your ass whether you like it or not.”

Interestingly, AAP had dropped Hari Nagar sitting MLA Jagdeep Singh and replaced him with Rajkumar Dhillon. Dhillon claims he was dropped for objections to the party considering a coalition with Congress during the 2019 Lok Sabha Election. Hari Nagar is a Delhi constituency with a high Sikh population and is a seat that was contested by the joint BJP-SAD candidate in 2013.

Nirmalya Dutta is the Web Editor of The Free Press Journal. He tweets at @nirmalyadutta23. 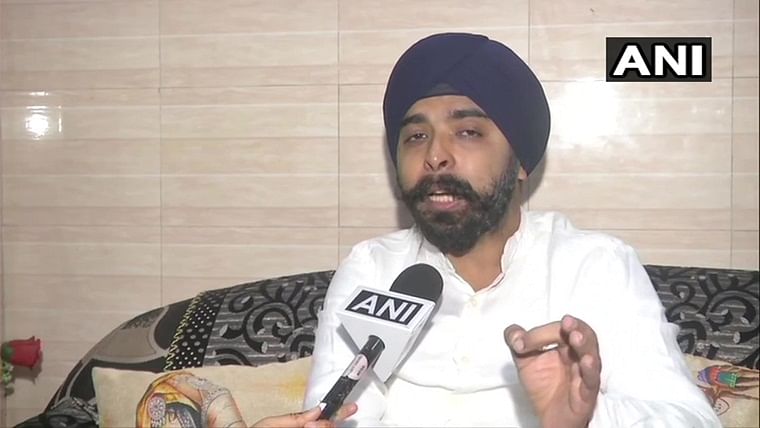