Friends: The Reunion review -- Lacks the magical zing of the show

Electrifying love, sizzling romance and heart-warming friendship that warmed the cockles of the heart… the '90s iconic TV series Friends had it all. No wonder, the series was aired for 10 seasons and had millions of clamouring fans including moi rooting for them.

The six lead actors of the show — Courtney Cox (Monica), Lisa Kudrow (Phoebe), Jennifer Aniston (Rachel), David Schwimmer (Ross), Matt LeBlanc (Joey Tribbiani) and Mathew Perry (Chandler) — became the poster boys and girls for us twenty-something bingers who craved to be like them— chilled out, free-spirited sassy go-getters who went about their lives armed with droll humour, witty one-liners, and a united front. And so, when the show ended on May 4, 2004, heart-broken fans vociferously pleaded with the makers to extend the show, the creators David Crane and Marta Kauffman were adamant, the show had to end. And so, it did!

But in 2021, after a span of 17 years, the makers along with the cast helmed a special episode titled Friends Reunion. In fact, it was an emotional moment for the entire Friends fandom when the ensemble cast reunited again at the same venue — Stage 24 on the Warner Bros Studio lot in Burbank where the show was originally shot — and shot a special episode, which had the six main cast members credited as executive producers. Emotions were running high and nostalgic fans including me just could not wait for this special episode to be aired. Friends: The Reunion would be a winner just like the iconic Friends series, we thought!

And so, when it did drop on the Zee5 platform, I was probably one of the first to watch it. But honestly, I was a bit disappointed. Perhaps, my expectations had rocketed sky high but some how, I did think the electrifying chemistry between the cast members that made the original Friends a super hit was completely missing in this episode. Age had definitely crept up on the stellar cast members and even though the actors — Matt LeBlanc, David Schwimmer, Mathew Perry, Courtney Cox, Jennifer Aniston and Lisa Kudrow — were warm with each other, one could make out a strange palpable awkwardness between them. Mathew Perry who played Chandler, in fact, spilled the beans when he said none of them had contacted him in the last 17 years. No wonder, the episode saw Mathew Perry speaking the least. Walk down memory lane: Friends - The Reunion will be nostalgic fare for the fans of the ‘90s...

Hosted by James Corden, who failed to re-create the magic even though he had the cast sitting on the same sofa in front of the iconic fountain that was on the montage of the original Friends series. He fielded various questions to the cast but somehow, they seemed rather run-of-the-mill and could not spark off any major discussion between them.

A trivia session helmed by David Schwimmer had Matt LeBlanc and Mathew Perry versus Jennifer Aniston, Courtney Cox and Lisa Kudrow in a competition about who knew Friends better. It then had the Friends cast nostalgically veering through various popular episodes of different seasons and also had iconic characters including Mr Heckle and the very loud ‘Oh My God’ Janice with her high-pitched laugh walk into the reunion sets. Plus a fashion show with the quirky costumes of the cast on the runway walked by celebrities including Cindy Crawford and Justin Bieber. 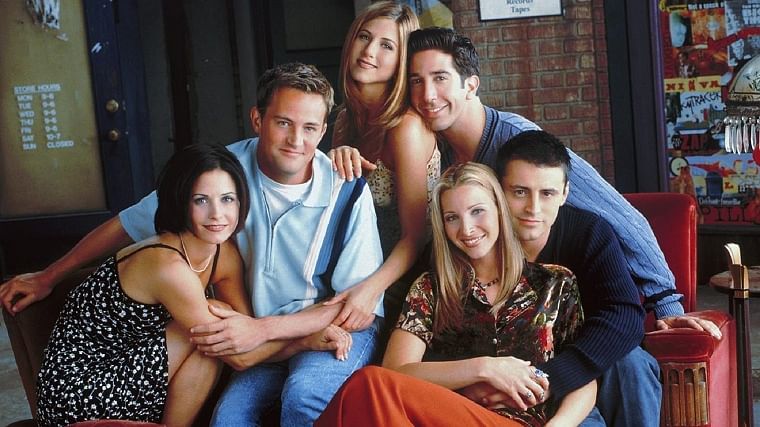 Revisiting Friends: From sexist undertones to body-shaming, in hindsight it looks like a problematic...
Advertisement

The creators David Crane and Marta Kauffman then interestingly shed light on how Monica, Ross, Joey, Phoebe, Chandler and Rachel were cast, and then went on to recreate a wistful wave as they discussed hilarious ‘behind the scenes’ shenanigans. Did you know that they had decided on Ross and Rachel’s love story based on live audiences’ reactions in London? It was first supposed to be just a one-night stand but then the audience loved the ‘Ross-Rachel’ pairing and so the makers made that a forever romance.

The cast then told their tale. The evergreen Matt LeBlanc, who stood out amongst the entire cast of Friends: The Reunion, had the audience in splits when he spoke about how he relocated his shoulder bone when he dived to grab the chair before Mathew Perry in one episode. As for real life romance, David Schwimmer confessed that he had a huge crush on Jennifer Aniston, but did they take it further into their real lives? They say no, Matt LeBlanc says, yes.

Peppered with celebrity guests like David Beckham, Tom Selleck, Lady Gaga and more, the show could have been magical but alas, it lacked the oomph of the original show. Indeed, Friends was iconic, Friends: The Reunion unfortunately, lacked that magical zing that the original show had. 'Friends Reunion': Jennifer Aniston, David Schwimmer reveal they were 'crushing hard on each other'...