To the unversed, the snow leopard is the state animal of Himachal Pradesh.

Snow leopard spotted in Himachal Pradesh | ANI
Follow us on

A snow leopard was spotted in Himachal Pradesh when the animal was resting on the rocks of the Chicham village of Kaza. The video showing the big cat coil beside a rock has gone viral on social media. Assistant Public Relations Office (Kaza) Ajay Banyal captured the rare spotting on his camera. The video was accessed by ANI which reported that the sighting occurred on Monday.

Due to poaching for their skin, bones, and other body parts, snow leopards are considered to be a rare species. However, Himachal Pradesh is home to a few snow leopards that are at times spotted and filmed on camera. In 2021, the state became the first in the country to complete population estimation of snow leopards and their wild prey.

Read Also
See pics: How many snow leopards can you spot in this viral click? 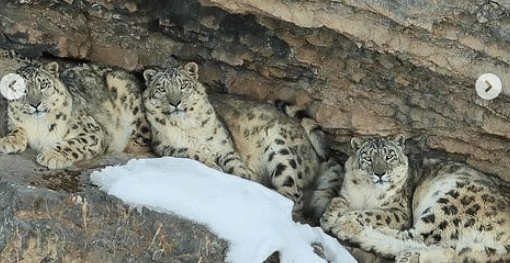