Snake spotted in US flight; passengers panicked | representational Image- FL360aero
Follow us on

The unexpected appearance of a snake on a plane sent passengers into a panic on Monday at the end of a flight from Florida's Tampa city to New Jersey and called the workers at Newark Liberty International Airport to catch the reptile, as per ANI.

The Port Authority of New York and New Jersey said in a statement that the airport's wildlife operations staff and Port Authority Police Department officers met United Flight 2038, a major American airline, at the gate and removed the 'garter snake' and later on released it into the wild, according to a media outlet. The statement further added that no one was injured and operations were not affected.

As per reports, the passengers flying in business class spotted the snake while the plane was taxiing after landing and they started shrieking and pulling up their feet.

After the snake was captured, passengers deplaned with their baggage, and the plane was searched for any other reptiles crawling aboard and found none.

The common garter snake is found in every Florida county and is not venomous or aggressive toward humans, according to reports citing the Florida Museum of Natural History. These snakes are also commonly found in New Jersey and are typically between 18 and 26 inches long, will tend to avoid direct contact with humans or pets and only bite if intentionally molested.

Earlier, in February, a similar incident took place on an AirAsia flight in Malaysia when the passengers found a snake while the plane was in the air. The viral Tik Tok video from the flight showed that the reptile was inside a light fixture above passengers.

A similar incident also happened in 2016, a supposedly venomous green viper emerged from an overhead compartment on an Aeromexico flight in Mexico. A passenger's video posted on Twitter shows the creature hanging from the ceiling of the plane, which received priority landing clearance when it reached Mexico City. 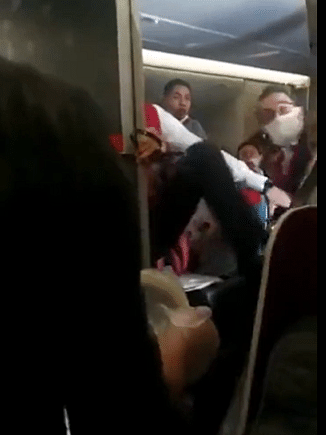