Nothing is Impossible! Man stands at Tube station, hoping to get a job; here's what happened.. 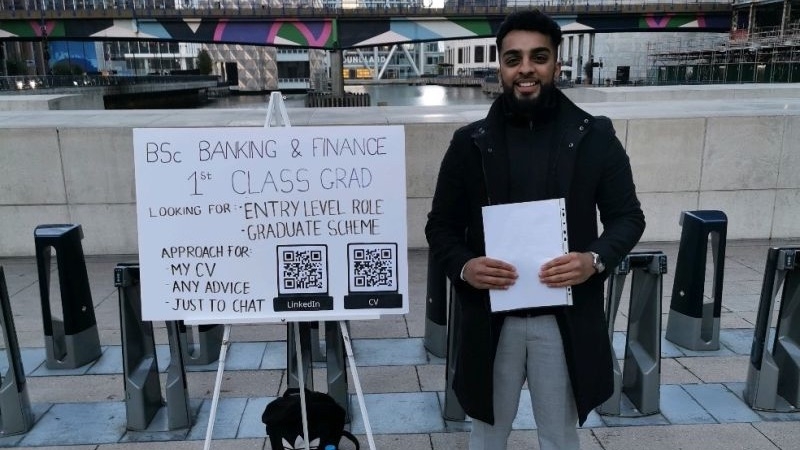 Who knew there were better places to seek jobs than platforms like LinkedIn and Naukri.com! Turns out there actually is; and this young man of just 24 years has proved the world just that.

In the hopes of landing a job in banking and finance, Haider Malik took challenged his luck in front of Canary Wharf station, as he tried to initiate conversations with people who were passing him.

He purchased a board from a stationery store and stuck QR codes on it so that others could easily view his CV and LinkedIn profile.

Despite having a first-class degree in banking and finance from Middlesex University, he had been unable to find work since the pandemic began.

Malik went to the crowded business sector of Canary Wharf on November 2 after growing increasingly upset with Zoom interviews that did not allow him to completely express his personality.

Malik in his LinkedIn post said that his father, Mehmood Malik, a former cab driver who immigrated to the United Kingdom from Pakistan as a youngster, influenced him.

The job seeker made a change by purchasing a board from a stationery store and sticking QR codes on it so that others could readily view his CV and LinkedIn profile.

Haider Malik had arrived at the station before 7 a.m. He finally received a message at 9.30 a.m. inviting him to an interview for a position as a Treasury Analyst with the Canary Wharf Group. When the 24-year-old returned to his car after the interview, he noticed the LinkedIn post had gone viral.