Previously, it was Virat Kohli who made history by being the first Indian cricketer to strike a century in a pink-ball Test, against Bangladesh at Eden Gardens. 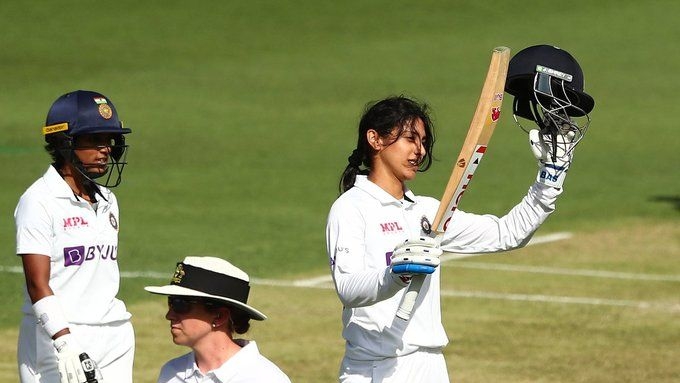 Smriti Mandhana became the first Indian woman to make a Test century in Australia, paving the way for a historic moment in women's cricket. It would be the first time the Indian women have played a Test match under the lights. This is also the second pink-ball Test in the history of women's cricket.

At the Carrara Oval, Mandhana hit 127 off 216 balls with 22 boundaries and a six, adding an Indian record of 102 runs for the second wicket with Punam Raut (36), continuing his strong performance after putting up 93 with Shafali Verma on a rain-affected first day. In the 52nd over, she got her century off a short-arm draw shot from Ellysse Perry.

Previously, it was Virat Kohli who made history by being the first Indian cricketer to strike a century in a pink-ball Test, which he did against Bangladesh at Eden Gardens. Smriti, who wears the same jersey No. 18 as Virat Kohli, successfully managed to make fans proud.

As Smriti Mandhana marks history, netizens have been going on and on, singing praises for the cricketer.

Many congratulations on scoring your first Test hundred.

Well played @mandhana_smriti : any hundred is special, a hundred in a day night pink ball test in Australia even more so.. I like the name ‘Goddess of offside..’! 👍👍 #SmritiMandhana

Que- who can play on off-side better than @mandhana_smrit ?
Ans- Non
What a brilliant player she is so good to watch congratulations for the 1st test hundred it's really special it came in #PinkBallTest on the Australian soil. #AUSvIND #SmritiMandhanapic.twitter.com/Hbd5rfDBy3

All in a #PinkBallTest where the closest to practice before the series was carrying a ball in her kit bag.

If #SmritiMandhana isn't the definition of swag, I do not know who is. pic.twitter.com/AqJtCu87ac How well-known is 'Bapu' among Gen Z? FPJ takes a quick look as the nation celebrates #GandhiJayanti