HomeUjjainUjjain: Fresh spell of rains may flood parts of city

Ujjain: Fresh spell of rains may flood parts of city

All the barrages of Kshipra river were flowing well above the danger mark.

A glimpse of fresh spell of rainy water in the city on Saturday. | FP PHOTO

Ujjain: Fresh spell of rains which started on Saturday afternoon and continued till late night may lead to flood-like situation in many parts of the city.

Heavy rains which lashed Ujjain Indore and Dewas district on last Saturday have led to flood-like situation in many parts of the city.

All the barrages of Kshipra river were flowing well above the danger mark. The authorities also have to release water from Gambhir reservoir to maintain its capacity up to 2250McFt. Similar was the situation of Chambal and others rivers of the area.

On Saturday amid hide and seek of sun since the morning medium to heavy rains started at about 3 pm and the downpour continues till filing of the report. Reports also suggest that heavy rains lashed out Indore and Dewas districts on the same day. Met department also sounded orange alert according to which Ujjain, Dewas and Indore districts would get excessive rains during next 24 hours.

As per available information, one of the gates of Gambhir dam was opened up to 0.25 mt at 4.45 pm to maintain its level up to 483.35 FTL. Officials say that decision to open gates will be taken after opening of the Indore’s Yeshwant Sagar dam late night. Barring one gate all 11 gates of Dewas’ Kshipra dam were close to maintain its level up to 493.600 FTL. So, the exact scenario is likely to be emerged by Sunday.

Meanwhile, 19 mm rainfall occurred between 8 am to 5 pm on Saturday in the city which took season’s rainfall figures to 721 mm (about 29 inch) though these figures were less as compare to the average annual rainfall of 36 inch. So far as Ujjain district is concerned, an average of 695 mm rainfall has been occurred so far which is about 366 mm less as compared to the corresponding figures of previous year. 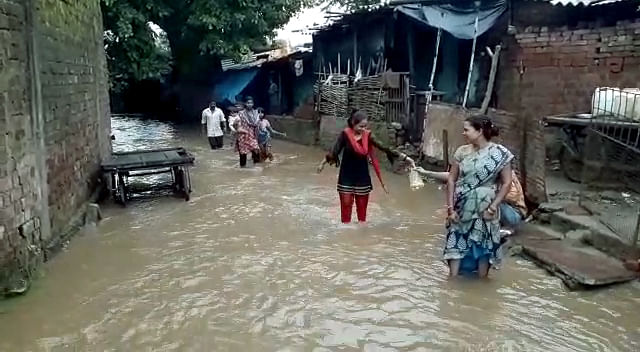