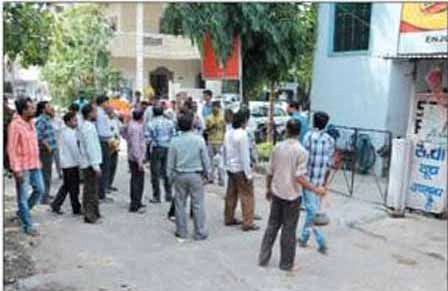 Ujjain (Madhya Pradesh): Relatives of a girl demonstrated in front of Mewar Hospital on Saturday demanding that she be provided treatment again.

They alleged that the doctors here did not perform the complete operation of the girl. As per inputs Yasmeen, daughter of Sikander, a resident of Kasrawad, fell in the house on July 4 and suffered a back injury. Her kin brought her to Mewar Hospital in Ujjain.

Here the doctors had discharged the girl from the hospital after doing an incomplete operation. The family took her to MY Hospital in Indore. After treatment of two months, now the doctors of Indore have given up in terms of her treatment. Her kin again reached Mewar hospital on Saturday and staged a demonstration.

They demanded saying, as they have spoiled the life of their daughter, they should make her healthy. CSP Vinodkumar Meena reached the spot and spoke to the hospital management. After this the girl was admitted to the hospital. Late in the evening, the girl has been sent to Mewar Hospital in Udaipur for treatment.