HomeTopnewsWhat is IAF and Army's 'Light Combat Helicopter': Here's everything about it

LCH is the only attack helicopter in the world which can land and take off at an altitude of 5,000 meters with a considerable load of weapons and fuel. It has an endurance of over three hours and a service ceiling at the maximum density altitude.

The fleet of the first four indigenous Light Combat Helicopter (LCH), was inducted into the Indian Air Force (IAF) at the Jodhpur air base on Monday in presence of Defence Minister Rajnath Singh, Chief of Air Staff, and Air Chief Marshal VR Chaudhari. The indigenous LCH is capable of destroying enemy air defence, conducting counter-insurgency strikes and much more.

According to its makers, the LCH is the only attack helicopter in the world that can land and take off at an altitude of 5,000 meters with a considerable load of weapons and fuel, meeting the specific requirements laid out by the Indian Armed Forces.

Manufactured by Hindustan Aeronautics Limited, the light combat helicopters have been designed indigenously in India. The choppers will be a major boost for the Indian Air Force.

The helicopter is equipped with the requisite agility, maneuverability, extended range, high altitude performance, and around-the-clock weather combat capability. The helicopter would be a potent platform to meet the operational requirements of the Indian Air Force and Indian Army. During the 1999 Kargil war, the Indian Air Force, for the first time realised the need for a homegrown lightweight assault helicopter that could hold precision strikes in all Indian battlefield scenarios. This meant the craft could operate in hot deserts and cold high altitudes, in counter-insurgency as well as full-scale battle scenarios.

As of now, India has been operating the 3-ton category Chetak, a French-origin helicopter that was made in India by the HAL. These helicopters were known as utility helicopters. Indian forces also operate Lancer which is an armed version of Cheetah. Currently, the Indian Air Force operates MI-17, Mi-17 IV, and Mi-17 V5 of Russian origin with a maximum take-off weight of 13 tonnes. The fleet is set to be phased out starting in 2028.

When the requirement for a more agile, multi-role dedicated attack helicopter arrived, with initial deliberations, the government sectioned the LCH project in October 2006 and the contact went to HAL’s Rotary Wing Research and Development Centre which had already worked on the Advanced Light Helicopter (ALH) Dhruva and its weaponised version ALH Rudra, embarked upon the project. 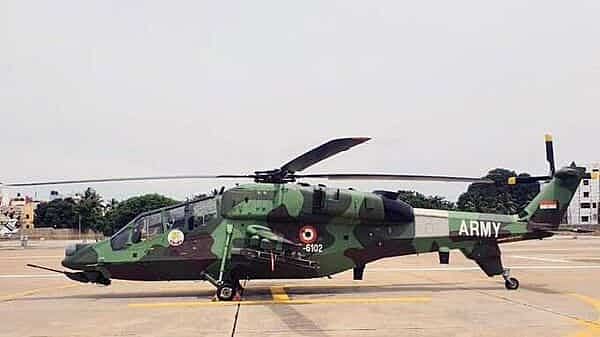 Design and development of LCH

The LCH has been designed as a twin-engine, dedicated combat helicopter of 5.5-ton class. The light category helicopter is a narrow fuselage and tandem — one behind the other — configuration for the pilot and co-pilot, who is also the Weapon Systems Operator (WSO).

The LCH has many ALH features except the tandem cockpit configuration which makes it sleeker making it state-of-art systems that make it a dedicated attack helicopter.

The clearance and induction of LCH by the IAF and the Army have been carried out on four prototypes.

In 2010, the first Technology Demonstrator was completed and the first flight was taken on March 29 of the same year.

In 2014 and 2015, TD-3 and TD-4 prototypes were completed and successfully tested other flight test requirements.

The testing was carried out at various altitudes, from sea level to the Siachen range, in extreme cold and hot weather conditions, and desert regions. The four prototypes have together undergone over 2,000 flights with close to 1,600 flight hours.

In 2017, initial operational clearance came for the IAF variant

In 2019, initial operational clearance came for the Army variant

In 2020, the MoD added LCH to the items under the import embargo.

In 2021, Prime Minister Narendra Modi symbolically handed over the LCH to the Indian Air Force, making its way to the final induction.

In 2022, in March the Cabinet Committee of Security (CCS) approved the procurement of 15 LCH Limited Series Production (LSP) — 10 for IAF and five for the Army. The cost for this inventory was INR 3,887 crore along with INR 377 crore for infrastructure sanctions.

Features and importance of the LCH

With a maximum take-off weight of 5.8 tonnes, the LCH operates at a speed of 268 kilometers per hour at a range of 550 kilometers. It has an endurance of over three hours and a service ceiling at the maximum density altitude. It can fly for 6.5 kilometers. With the radar-absorbing to lover radar signature, the helicopter has a significantly crash-proof structure and landing gear. Its pressurised cabin offers protection from nuclear, biological, and chemical (NBC) contingencies.

The indigenous helicopter is equipped with a countermeasure dispensing system that protects it from enemy radars or infrared seekers of enemy missiles. There is a 20 mm turret gun, 70 mm rockets, and air-to-air missile systems onboard.

With these combat features, LCH has capabilities of playing an important role in the destruction of enemy air defence, combat search and rescue, anti-tank, counter surface force operation, and counter insurgency warfare.