Set a revised target of 151 in 16 overs after a brief spell of rain, Bangladesh fell short by five runs.

Set a revised target of 151 in 16 overs after a brief spell of rain, Bangladesh fell short by five runs.

Nurul, who kept Bangladesh in the game in the final over with a six and a four off Arshdeep Singh, seemed to criticise the on-field umpires after the game. The incident went unnoticed by the match officials.

As Bangladesh plan to take the issue to ICC, former India cricketer Aakash Chopra has admitted that Kohli was guilty of fake fielding.

"Woh fake fielding tha, 100% tha, wo jo throw marne ka prayas kia wo agar umpire dekhte toh 5 run ki pentaly padti humko aur 5 run se hum match bhi jeete. (Yes that was 100% fake fielding because of the way Kohli attempted to throw the ball. If the umpires had seen him do that, we would've been slapped with a five-run penalty and we've won by five runs only.) So we escaped here but next time if someone does this then the umpires will have to be more careful. So are Bangladesh right? Yes, they are but nobody noticed it then so can't do anything now," Chopra said in a video on his YouTube channel. 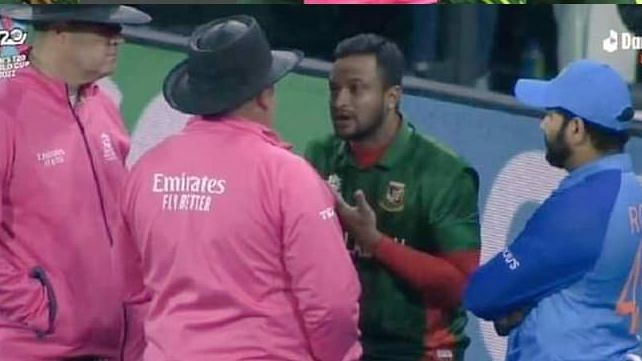