HomeSportsT20 World Cup: R Ashwin, a spinner who can make crucial contributions with bat too

T20 World Cup: R Ashwin, a spinner who can make crucial contributions with bat too

Melbourne: It raised several eyebrows when R Ashwin was selected in the India playing 11 ahead of Yuzvendra Chahal in the ICC T20 World Cup 2022. After all, Chahal has been touted as India’s No 1 spinner in the white ball formats.

The leg-spinner has a record to match the billing as well. With 85 wickets from 69 matches, Chahal is India’s second highest wicket-taker in T20Is behind Bhuvneshwar Kumar and the top wicket-taker among Indian spinners.

Those numbers are not to scoff at but the team management decided to go ahead with Ashwin, perhaps giving weightage to his obviously better abilities with the bat. But even then that looked like a flimsy argument.

Ashwin is definitely a very handy batsman and has proved his credentials several times in Test cricket and has the timing that can make a front-line batter blush. But T20 demands a totally different kind of skill set, and Ashwin does not fit into the frame of a standard T20 power hitter.

But on two occasions in this World Cup, Ashwin proved his worth with the bat and that too in crunch situations.

First instance came when Ashwin cleverly avoided playing a delivery sliding down the leg side from Pakistan’s Mohammad Nawaz to earn a wide i.e a run and an extra ball.

With one run needed from one ball, Ashwin effected a cool finish to earn India a tight win.

The second time Ashwin’s usefulness with the bat was on show against Bangladesh. The right-hander hammered Shoriful Islam for a six and a four in successive deliveries in the 20th over, helping India to go past the 180-mark.

Those 10 runs had a major impact in the end calculations when the DLS equation was considered. The victory margin was just five runs, and that only added weight of gold to those 10 runs in the last over by Ashwin.

Ashwin attributed that beef in batting to diligent practice at nets in preparation to the World Cup in Australia. “I don't have a lot of balls to plan and take it on. But, you know, that's pretty much been our plan here.

“I think it's not only the lower batsman. Because of the bounce and boundary sizes, people have tended to go a lot of length and short balls.

“It is a very critical shot to practice. You can't keep thinking ‘go in there and think how I'm going to rotate it’ and all of that. You have to be practicing and giving your instinct the best chance to hit that ball,” said Ashwin.

Now, let’s take a look at his primary suit — the off-spin. Ashwin has bowled 13 overs across 4 Super 12 matches and took just 3 wickets while conceding runs at 8.1 runs per over. He also had to cope with criticism for conceding 43 runs in four overs in a low-scoring match against South Africa.

But through his batting, Ashwin has found another arrow to contribute to the team’s cause. 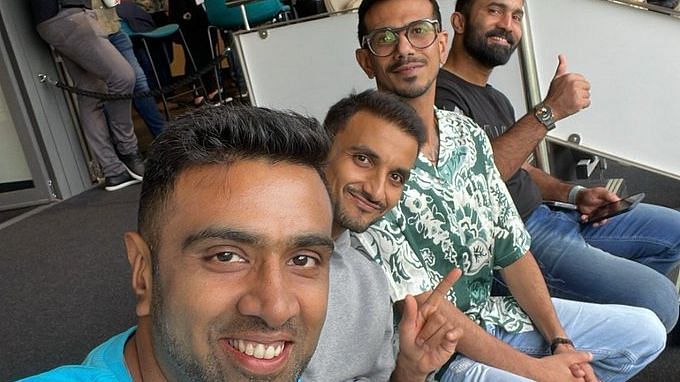