Shaheen Afridi had left the field during the T20 World Cup final on November 13, 2022 after landing awkwardly while taking Harry Brook's catch

Karachi: Pakistan pacer Shaheen Shah Afridi has resumed his rehabilitation here on Monday for the knee injury he had suffered during the T20 World Cup final against England in Melbourne last year.

The 22-year-old had left the field during the final on November 13, 2022 after landing awkwardly while taking Harry Brook's catch. Shaheen returned to bowl the 16th over but the unbearable pain forced him to leave after the first delivery.

The injury, while not serious, had caused knee discomfort to the bowler due to a forced knee flexion while landing.

"Left-arm fast bowler Shaheen Afridi will resume his rehabilitation under the national men's team's medical staff in Karachi from today. While providing Shaheen top-notch care, this move will allow the medical staff to track his progression and pave way for his smooth return to action," said a Pakistan Cricket Board (PCB) statement on Monday.

The injury to the pace bowler gave England a huge advantage in the World Cup final with Iftikhar Ahmed, who completed the over, giving away 13 runs in the remaining five balls.

Afridi was also left out of the Test squad for the three-match series against England, which concluded recently with Ben Stokes' side winning 3-0.

Before the T20 World Cup in October-November last year, Afridi had undergone rehabilitation in London for a knee injury he had sustained while fielding during the first Test against Sri Lanka in Galle in July.

"The interim selection committee and team management have invited right-arm fast bowler Haris Rauf to be assessed by the team's medical staff so a decision on his availability for the three One-Day Internationals against New Zealand — to be played next week — can be made," the PCB also said in the statement. Rauf was ruled out during his debut Test against England in early-December last year after suffering a quadricep strain. The 29-year-old didn't take any further part in the three-match series. 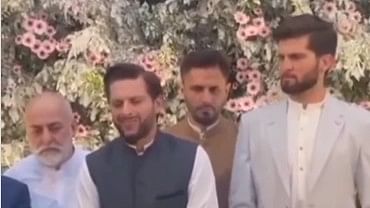