HomeSportsInd vs Pak: Women in Blue suffer 13-run loss to archrivals in Aisa Cup 2022, their 1st defeat in six years

Ind vs Pak: Women in Blue suffer 13-run loss to archrivals in Aisa Cup 2022, their 1st defeat in six years

Indian batters bungled badly in a straightforward chase as Pakistan recorded their first win over the arch-rivals in six years with a 13-run victory in the Women's Asia Cup, here on Friday.

India, the most formidable team in Asia by some distance, batted poorly to be all out for 124 in 19.4 overs after Pakistan posted a modest 137 for six.

Pakistan scripted a remarkable turnaround less than 24 hours after their shock loss over Thailand.

At 65 for five, India were in all sorts of trouble with majority of the batters including star player Smriti Mandhana (17 off 19) throwing their wickets away.

Prior this game, India enjoyed a 10-2 record over Pakistan whose previous win over the arch-rivals came way back in the 2016 T20 World Cup in New Delhi.

Pooja Vastrakar got herself run out after attempting a run off a misfield while Dayalan Hemalatha (20 off 22) let her team down after not capitalising on a start.

Questions were raised over Harmanpreet Kaur's fitness as she came into bat at number seven before perishing cheaply.

"I think in the middle we were trying to give other batters a chance. That cost us today. It was a chaseable target. In the middle overs, we were not able to rotate the strike," a dejected Harmanpreet said after the match.

With India needing 61 off the last six overs, Pakistan were the favourites to pull of an unexpected win.

Richa Ghosh (26 off 13), who had be taken off the field in Pakistan's innings after suffering a heat stroke, brought India back into the game with three sixes against the spinners before getting caught in the deep in the 19th over. Her dismissal effectively ended all of India's hopes.

Earlier, Pakistan, who were shocked by Thailand on Thursday, put an improved batting performance against the Indians but it still seemed below par.

Dar was the pick of Pakistan batters as she used her feet well, especially against the spinners, to get the big hits.

Off spinner Deepti Sharma (3/27) stood out among India's bowlers with best figures. She was not afraid to give some loop to the ball, helping her deceive Pakistan opener Muneeba Ali (17) that resulted in getting stumps.

Omaima Sohil fell two balls later as she was found trapped in front of the stumps while attempting a sweep.

Bismah got lucky on 8 with the umpire turning down Rajeshwari Gayakwad's appeal for what it appeared a clear lbw dismissal.

Pakistan reached 61 for three in 10 overs. Dar then gave the innings some momentum as she stepped out to smashed Hemalatha for a four and straight six in a 15-run over.

Indian fielding was found wanting on more than one occasion with substitute Shafali Verma missing an easy stumping chance.. 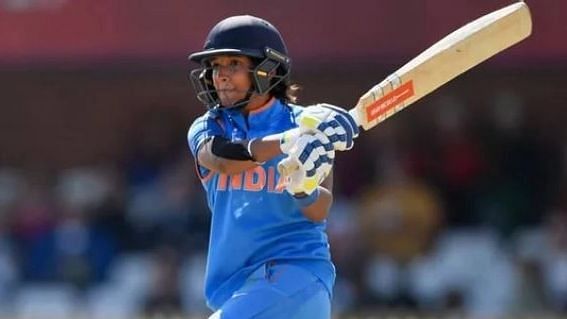