The proposed Thane-Borivali twin tunnels digging work will be done using Tunnel Boring Machine (TBM) instead of controlled blasting method, according to the information provided by the Urban Development Department Minister Eknath Shinde's office. Since the twin tunnels will be passing through the 40 hectares of land within the Sanjay Gandhi National Park (SNGP), therefore to minimise the damage/destruction to the park's biodiversity, the TBM will be used.

Also, the said project is excluded from the need for environmental clearances the UD minister informed.

Environmentalist and director of NGO Vanshakti, Stalin Dayanand, objected to it. He said, "The way MOEF is treating our protected areas is a cause of concern. The environment protection act was specifically enacted to ensure that the precautionary principles are followed while carrying out such developments. Every time it cannot be justified saying that the project is in public interest and the environment is to be bulldozed. There are always mitigation measures. Environmental aspects cannot be completely ignored. It is unethical, grossly illegal and unconstitutional".

As per the new developments, the revised project cost is pegged at Rs 11,235.43 crore now. Eight times high of the earlier project cost which was estimated to Rs 1,500 crore.

The FPJ had reported first, how the SNGP authorities have said no to the control blasting method suggested by the Maharashtra State Road Development Corporation(MSRDC) in 2019 over environmental concerns. The use of TBM would double the project cost by Rs 3,000 crore which was pegged at Rs 1,500 crore by the MSRDC as reported back then.

Currently this project has been handed over to the Mumbai Metropolitan Region Development Authority (MMRDA) in exchange to the Virar Alibaug Multi Model Corridor; now with MSRDC. Since it is carrying out the Nagpur Mumbai Samriddhi Corridor and as Virar Alibaug Multi Model corridor will bring freight traffic from Jawaharlal Nehru Port Trust (JNPT) to this newly underconstructed corridor it was given to MSRDC for speedy implementation.

Meanwhile the MMRDA before starting the project civil work is required to obtain total 57 hectares of land. The project is scheduled to begin in March 2022 and will take five and a half years for completion.

As per the planning of the project, the twin tunnels will have cross tunnels every 300 metres and this design will allow vehicles to travel at 80 kilometres per hour. Following which the 60 minutes travel time will be shortened to 15 to 20 minutes only, resulting in saving time and fuel by 10.5 lakh metric tonnes. This project alome will be contributing 36 percent reduction in carbon dioxide emissions, the minister's office claimed.

Besides, the tunnels will have a drainage system, a smoke detector, and a jet fan. This will ensure that the air within the constructed tunnel remains clean and fresh through out the passage.

The twin tunnels will be 11.8-kilometer-long connecting road with 10.25-kilometer-long two three-lane tunnels built beneath the SNGP, running from Tikuji-Ni-Wadi (Thane) to the western Expressway Highway (Borivali).

Urban Development department & Thane District Guardian Minister Eknath Shinde commented: "Our aim is to give world-class infrastructure facilities across the state. As part of this, the twin tunnel would connect Thane and Borivali. The central and western suburbs of Mumbai will get closer at a driving distance of only 15 minutes. The new connectivity will provide major relief to commuters. For the speedy implementation of project on ground, land acquisition work has also been started by the implementing agency MMRDA." 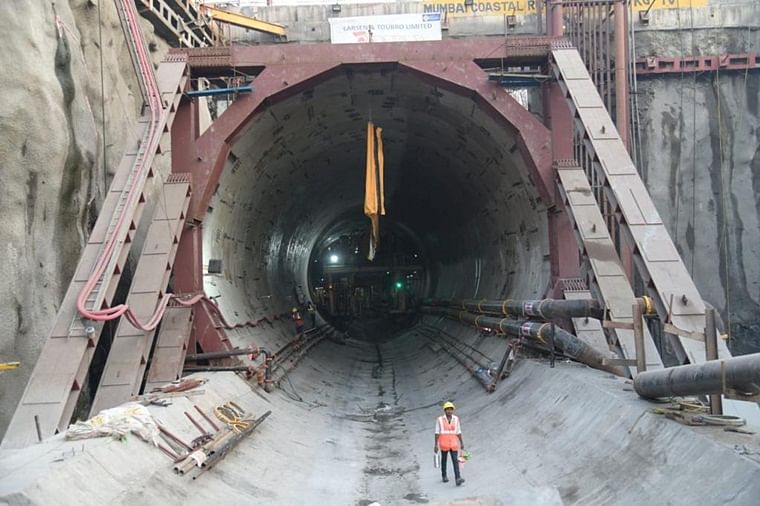