Mumbai: Hancock Bridge to be ready by November 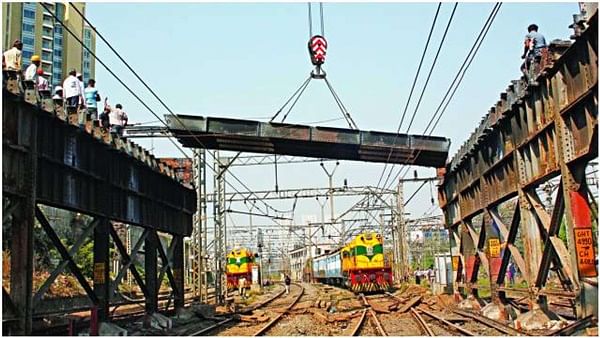 In January 2016, the Central Railway (CR) had demolished the Hancock Bridge, which was built in 1879. Five and a half years later, the authorities have finally completed replacing it with new girders, which is a major part of the bridge. A 62 meters long girder, which is the second steel girder of this bridge, was placed over the tracks earlier this weekend.

Now, what remains is the work of laying a new road on top of the girder, an approach road and other related work. It will take a few more months before Hancock Road over bridge is open to the public. This work on the second carriageway was carried out between Sandhurst Road and Byculla stations on the night of June 6 and June 7. Sources said Hancock Bridge is expected to be ready by November this year.

On Sunday, the CR on various parts of the Mumbai suburban section carried out work that is equivalent to 278 hours of mega block. About 900 workers from all the departments carried out work related to major signal and telecommunications, replacing two signal units, 37 continuity bonds, 17 track lead wires and six glued joints and three rodding sets along with tongue and stock rail. Apart from this, they also replaced 12 plated crossing sleepers with turnout sleepers and one HT crossing with CMS crossing, amongst others.

The old Hancock Bridge was a bridge in Mumbai located between the suburban railway stations of Sandhurst Road and Byculla. The bridge was initially built in 1879 during the British India era. It was named after Colonel HF Hancock, who served as a member and president of the then Bombay Municipal Corporation (now MCGM) during that period. It underwent reconstruction in 1923 before it was completely demolished in January 2016 for another reconstruction.

HomeMumbaiMumbai: Hancock Bridge to be ready by November