No, rebel Shiv Sena leader Eknath Shinde has not left for Mumbai to meet Deputy Speaker of Legislative Assembly Narhari Zirwal. He has returned to the Radisson Blu Hotel in Assam's Guwahati after around 2.5 hours. He had reportedly gone to the Kamakhya Temple to offer prayers, reported news agency ANI.

The list, submitted late on Thursday, has also attached two resolutions stating -- Shinde continues to be the chief of Shiv Sena Legislative Party, and MLA Bharat Gogavale has been appointed new Chief Whip. The group claimed the support of 40 MLAs plus a dozen independents and smaller parties.

The development came shoulder-to-shoulder with the Shiv Sena in Mumbai submitting a list of 12 MLAs, including Shinde, to Zirwal, demanding their disqualification late on Thursday.

Party MP Arvind Sawant said that the disqualification has been sought for flouting the Sena's Whip to attend a meeting of party legislators held on Wednesday.

The development came after the party on Tuesday removed Shinde as the Shiv Sena Legislative Party Leader and replaced him with Ajay Chaudhri, which the Deputy Speaker has accepted, but the rebels group has cried foul.

Dismissing the Sena move, Shinde said in Guwahati that the move was 'illegal' and intended to scare the legislators. "We are not frightened by all this. We know what they are doing and we also are aware of the laws and procedures... Let them send any number of letters or notices, we are not bothered," declared Shinde. 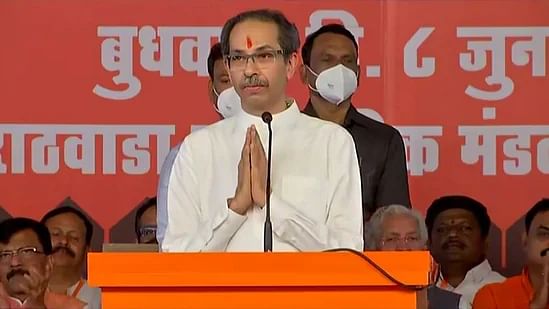