Several firefighters from Chandrapur, Ballarpur town and various other places and companies rushed to the site where the high flames could be seen from a long distance.

A massive fire broke out at the wood depot of a paper mill and spread fast in the area here in Maharashtra, following which a highway nearby was closed for some hours, causing a huge traffic jam on the route, officials said on Monday.

There was no report of any casualty so far in the blaze, which erupted on Sunday evening in the wood depot of Bilt Graphic Paper Products Limited on the Ballarpur-Allapalli road in Chandrapur district, they said.

Several firefighters from Chandrapur, Ballarpur town and various other places and companies rushed to the site where the high flames could be seen from a long distance.

It was difficult for the firefighters to reach the spot and hectic efforts were still on to control the massive blaze, an official from Ballarpur police station said.

"We received info at 4pm yesterday about the fire in a wood depot of a paper mill in the Ballarpur area of Chandrapur. We inspected the site at 5pm & found that Ballarpur fire brigades will not suffice to control the fire," ANI quoted Ballarpur Tehsildar, Sanjay Rainchwar as saying.

"Fire is still not under control. 25 fire tenders are engaged in dousing ops. The reason for the accident is yet to be ascertained," he added.

The depot had about 40,000 tonnes of wood stock, an official from the paper company said.

From the wood depot, the blaze spread to a petrol pump, located about 100 metres away, which did not have the fuel stock and was shut for 10 days, as well as to a bamboo depot of a private company, the police official said.

The Ballapur-Allapalli highway, located near the spot, was closed during the night, which led to a heavy traffic jam of up to five km on the road, he said.

The highway was opened for the public on Monday morning and the jam was cleared, the official said.

Read Also
Mumbai: Fire breaks out on third floor of Happy Home & School for the Blind in Worli 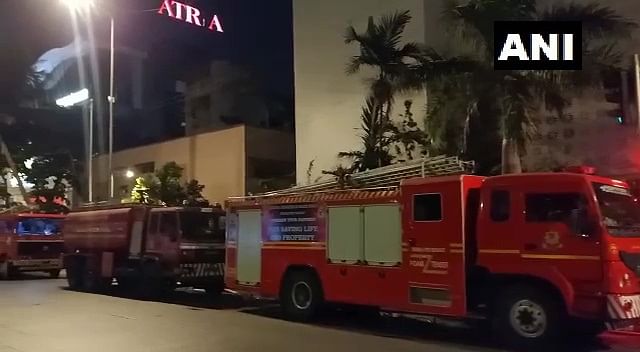