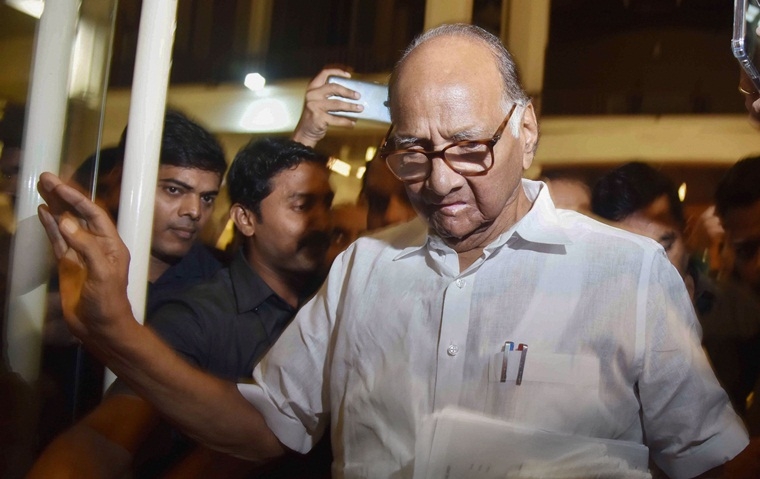 Pune: Amid the political drama with NCP’s Ajit Pawar supporting the BJP to form government, the people of Baramati, which is the bastion of Pawars, are hopeful NCP chief Sharad Pawar will be able to resolve the current crisis in his party.

Ajit Pawar, the NCP chief’s nephew who won from Pune’s Baramati seat in the last month’s state poll with a huge victory margin of 1.65 lakh votes, on Sunday joined hands with the BJP in a coup and took oath as deputy of Maharashtra Chief Minister Devendra Fadnavis.

While some locals from Baramati expressed displeasure over Ajit Pawar’s step, others were hopeful that Sharad Pawar would be able to handle the situation and bring his nephew back into the NCP.

“The decision of Ajit Pawar is wrong but we are sure that senior (Sharad) Pawar will bring him back to the party fold,” a 35-year-old local from Baramati said on condition of anonymity. Maha Govt Formation: Legally speaking, why BJP and Ajit Pawar are so confident

Another resident of Katewadi, a village in Baramati constituency, said recently, when it was almost decided that the NCP and Congress will form government with the Shiv Sena, some locals burst firecrackers.

“But, there were no celebrations on Saturday morning when Ajit Pawar took the oath as deputy chief minister by joining hands with the BJP,” he said.

Hours after the dramatic political developments in Mumbai on Saturday, a huge hoarding in support of Sharad Pawar came up in Baramati, but it was removed by the local civic body within a couple of hours.

Though police said the banner was removed as it was put up without permission in the municipal council premises, an NCP worker said the hoarding was removed to ensure that the “split” in the Pawar family does not come out in the open.

When a local was asked whom would he choose between the two Pawars, he said, “We are in a state of confusion right now, but one thing is sure that everything will be good and Ajit dada will come back to the party fold.”

Another Baramati resident said there might have been some reason why Ajit Pawar took such a decision. “If he has taken the decision, we are with him,” he added.

Another local claimed Ajit Pawar is more accessible than the NCP chief and his daughter Supriya Sule, who is the Lok Sabha member from Baramati.

“It is Ajit dada who does all the work at the ground-level. He is more accessible than Pawar saheb and Supriya ‘tai’ (sister),” he said.

An NCP functionary from Baramati, who is considered close to the Pawar family, said though people are confused about the current political developments, they are adopting a “wait and watch” policy rather than taking sides.

Camil Parkhe, a local journalist and political analyst, said looking at the current political scenario, it is evident that there were bickerings in the Pawar family.

“Even if the NCP chief was against fielding Ajit Pawar's son Parth Pawar from Maval in the Lok Sabha poll, Ajit Pawar insisted and got him fielded, but he (Parth) lost to a Shiv Sena candidate. This led to some sort of rift in the family.”

Ajit Pawar also felt he was being sidelined in the party, and that “sense of alienation” might have prompted him to take such a decision, Parkhe claimed. “Ajit Pawar was not keen on joining hands with the Shiv Sena, instead he was in favour of supporting the BJP,” he added.