BJP MLAs objected to convening of the session and also NCP leader Dilip Walse Patil's appointment as pro-tem Speaker in place of BJP's Kalidas Kolambkar before walking out.
PTI 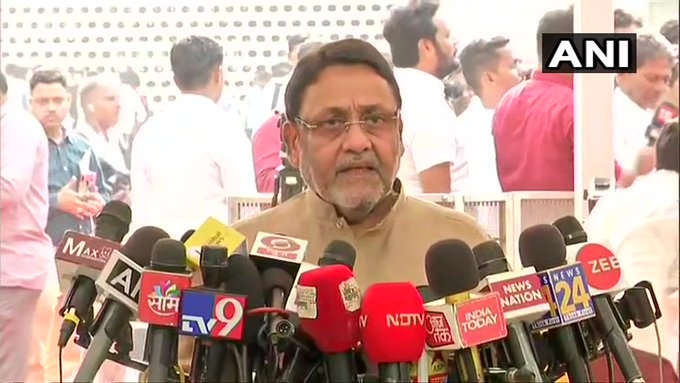 The NCP on Saturday accused the BJP of running away from the House after the opposition party staged a walkout before the Uddhav Thackeray-led Maha Vikas Aghadi government faced a floor test.

The Shiv Sena-NCP-Congress alliance government passed the floor test with 169 votes in favour. The BJP's 105 MLAs walked out before head count began in the 288-member House.

BJP MLAs objected to convening of the session and also NCP leader Dilip Walse Patil's appointment as pro-tem Speaker in place of BJP's Kalidas Kolambkar before walking out.

The NCP's chief spokesperson Nawab Malik said Walse Patil was appointed as pro-tem Speaker with Governor Bhagat Singh Koshyari's consent. The session too was convened after Koshyari's approval, he said. "They wanted some excuse to run away, that's why all this (ruckus). Devendra ji (BJP leader Devendra Fadnavis) should take lessons from (senior BJP leader Eknath) Khadse on how an opposition leader should work," Malik said.

NCP MP Supriya Sule too said that the BJP ran away from floor test.

"We are absolutely democratic. We will not stifle their (opposition's) voice. For us, the battle is not personal. We will win their hearts with love," she said.

"Maharashtra never saw vindictive approach. Our government will not work in a vindictive manner...They (the BJP) ran away when the floor test was on," Sule said. "But instead he raised minor technical issues. This was not right," Chavan said.