Ujjain (Madhya Pradesh): Chief Minister Shivraj Singh Chouhan here on Wednesday exhorted the people not to make any mistake by electing the Congress in the Ujjain Municipal Corporation (UMC) as they would only fight each other. “We are committed to changing the lives of people, so public welfare schemes and development works will be conducted simultaneously. One lakh jobs will be provided to youths after establishment of a medical device park in Ujjain,” he said.

Amidst pleasant weather on Wednesday, CM Chouhan and BJP State president VD Sharma sought support from the public for the party candidates in the UMC elections. Before going to the public, both of them worshipped the Mahakal Jyotirlinga wearing sola (stitched cloth) in the sanctum-sanctorum of the temple. Ujjain’s mayoral candidate Mukesh Tatwal and Indore’s Pushyamitra Bhargava were also present. Higher education minister Mohan Yadav was also there with them. However, MP Anil Firojia and MLA Paras Jain could not go inside along with them. 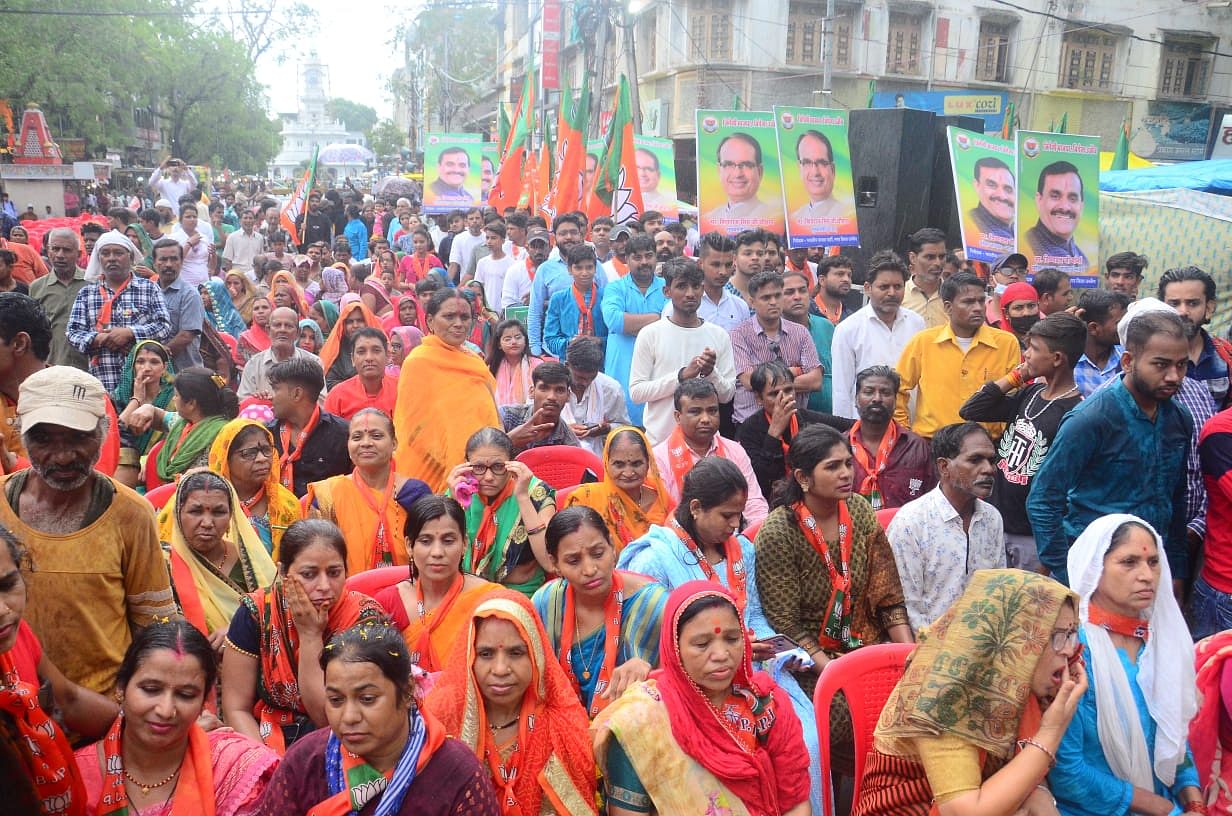 Comparatively less number of people turned up at the meeting venue. | FP Photo

Due to the rain, the crowd in the meeting was very small. Due to the rain, people were barely present at the Ashok Crockery shop. The whole rear part was empty. Tatwal first addressed the gathering of about two thousand people and said that I will leave no stone unturned to make Ujjain number one. I assure you that I will always keep your pride, honour and glory high. Tatwal did not stop here, he got down on his knees on the stage and first sought blessings from the public and then he sought the blessing of the leaders sitting on the stage.

While addressing the meeting, CM Chouhan said that you compare the development of your city with that of Congress’s era. Then Ujjain used to be a town, today it has become a metropolis. BJP believes in development and also develops. You choose BJP mayor and corporator candidates, no stone will be left unturned for the development of the city. We will make Ujjain the city of dreams. It will be identified as a clean city, green city, smart city, IT city, start-up city, education hub. People will come here to have darshan of Lord Mahakal by road and rail as well as by air. We served people a lot in Covid-19 period. Many schemes have been run from the level of Prime Minister to Chief Minister.

Chouhan said that the BJP’s mayor candidate Mukesh Tatwal runs the school for the orphans who used to roam on the railway platform, and to run the house, he worked from paan shop to bakery, as well as giving time to BJP. Our party has given such workers a chance. He said that the Congress party today lacks workers and leaders that is why it is giving opportunity to the MLAs. They did not find a single worker in Ujjain who could be a candidate for the post of mayor?

KAMAL NATH HAS FLED TO MAHARASHTRA

CM said that Kamal Nath did nothing in his 15-month government except lying to the people of the state, stopped the schemes for the poor, and did not give money for the Kanyadan scheme. If he did anything, it was to encourage corruption. Those who could not save their government have gone to save the government in Maharashtra today. Chouhan said that ‘Twitter Nath’ has given an opportunity to such a candidate who, like him, is active only on social media and does the work of serving lies. That’s why I say “Kamal Nath’s hand is with the Congress candidate, the rest of the Congress has become an orphan and Kamal Nath has fled to Maharashtra.” 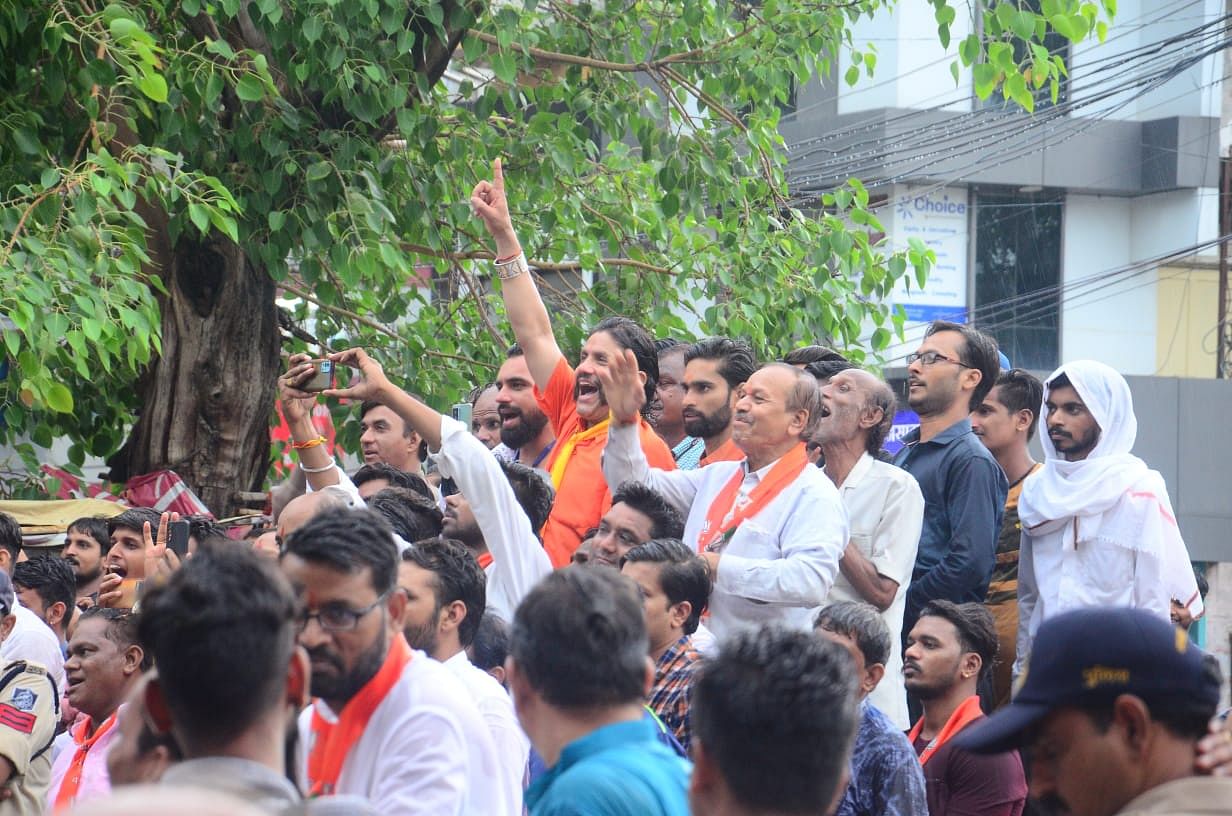 The jubilant BJP workers respond to the CM’s call from the dais of election meeting. | FP Photo

BJP president VD Sharma also addressed the meeting. It started about 90 minutes late than scheduled. Eight Congress workers including ticket aspirants and party functionaries including acting president of Madhav Nagar Block Congress Sunil Gothwal along with an AAP functionary joined the BJP during the programme. Anil Jain Kaluheda conducted the proceedings and Vivek Joshi proposed a vote of thanks. 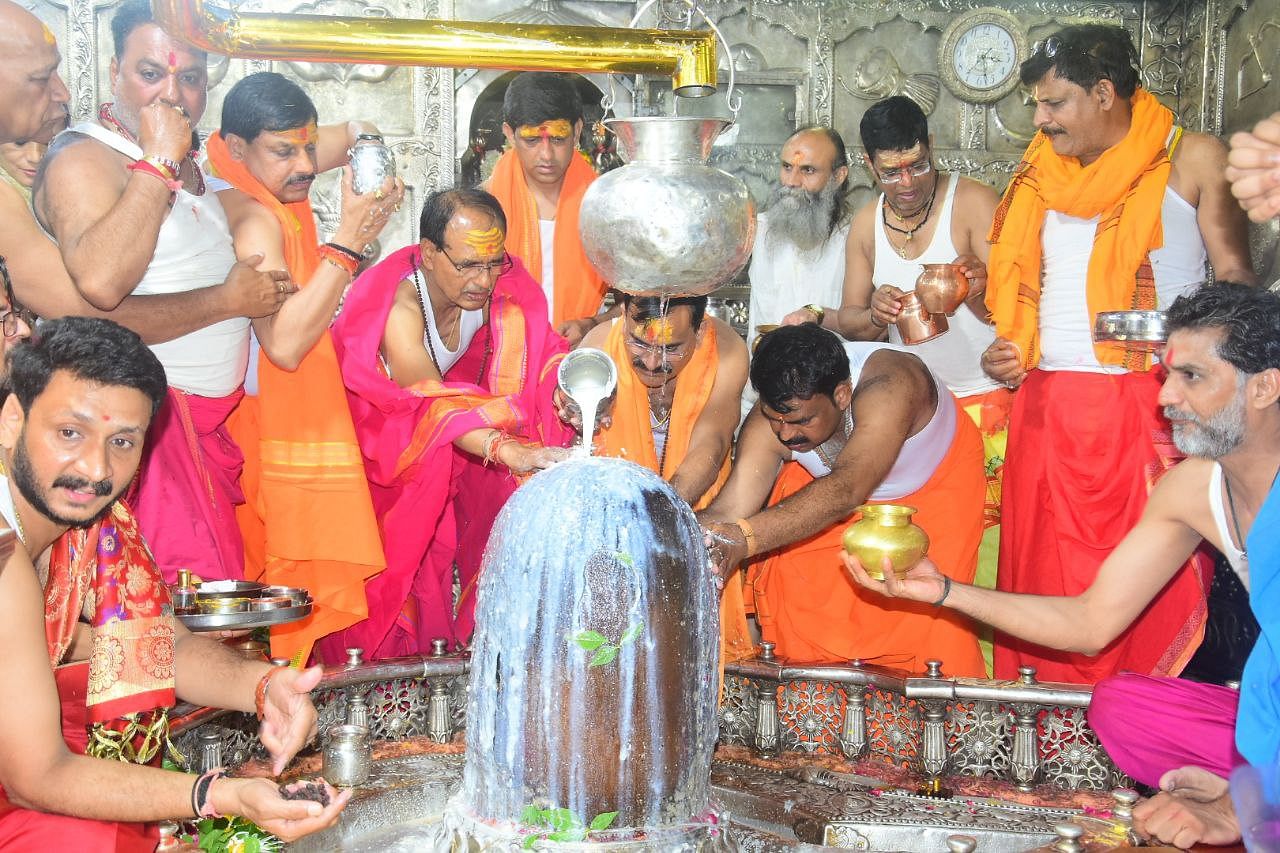 CM Shivraj Singh Chouhan said at Mahakaleshwar Mandir that Congress had converted our cities into towns and villages. BJP changed their face. We turned garbage dumps into beautiful gardens. Now BJP candidates are getting elected unopposed at many places for example Shahganj (Sehore) and Surkhi (Sagar). In Gram Panchayats, Sarpanch and Panch belonging to BJP are being elected unopposed. We have come out to seek the blessings of the people. Baba Mahakal will give us a huge victory. Congress only ruins and destroys things, he added.

Earlier, the CM who landed on the Nagjhiri helipad greeted the leaders of Ujjain with “Jai Mahakal”. Leaders competed with each other to get themselves clicked with the CM . Former corporator Santosh Vyas lodged an objection with the CM for not giving ticket to his wife and former corporator Ritubala Vyas from ward 48. Earlier in the day, minister Mohan Yadav reportedly approached the Vyas couple to withdraw Ritubala’s nomination form, but she did not respond. The CM asked Santosh Vyas that last time he was a corporator, was he not? Vyas said that the ticket was not given even last time. The CM said let’s work for the BJP organisation this time.