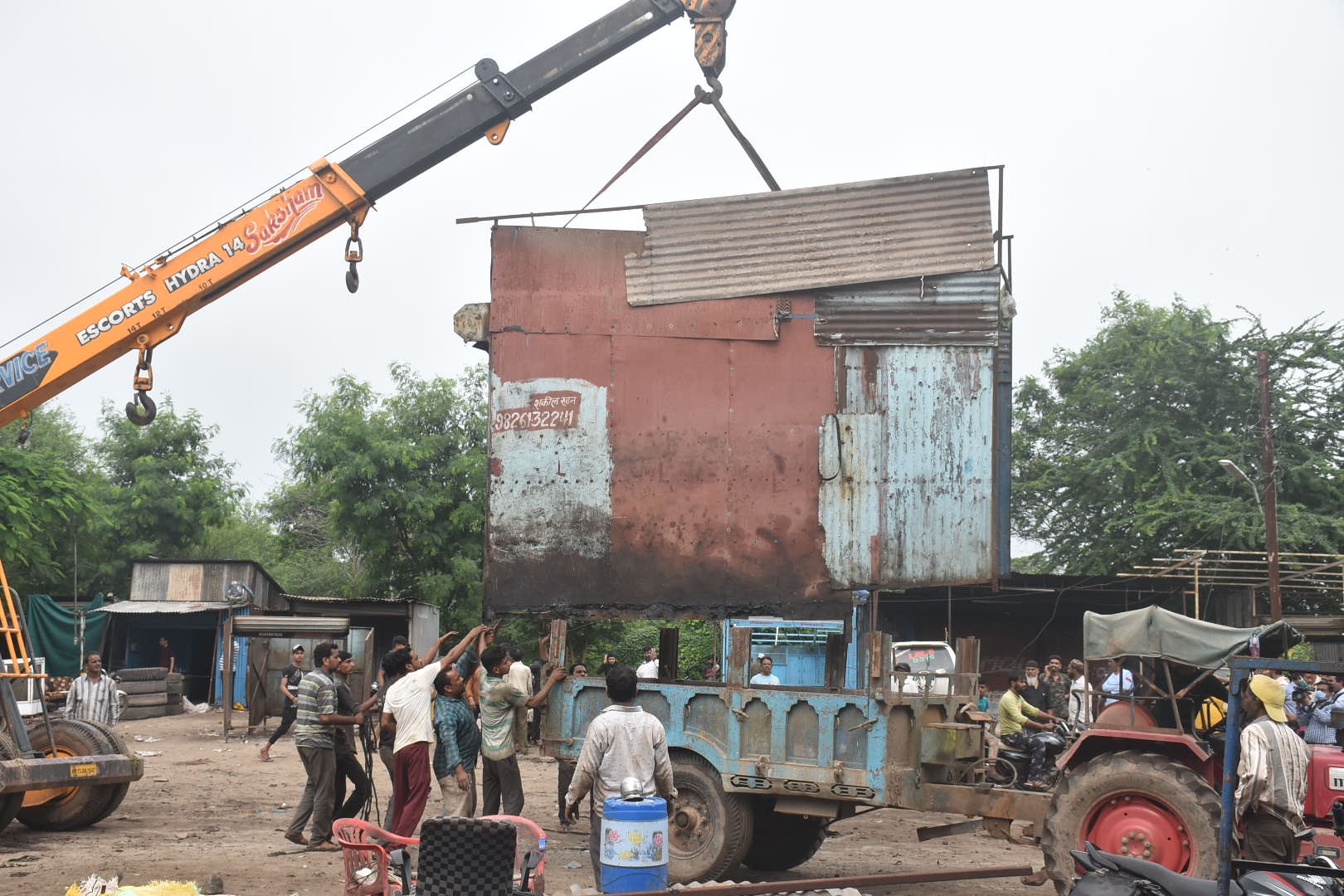 A Poclain machine carries away a kiosk | FP

Ujjain: Ujjain Municipal Corporation and local administration razed 213 commercial structures which were erected on a government land in the Hariphatak Over-bridge on Friday.

About two hectares near Mannat Garden was declared government property by the SDM about a year ago. The administration had taken possession of the land but the small shops, garages and godowns on it were not removed. The land of Mannat Garden only is under possession of Ujjain Municipal Corporation (UMC) and now the condemned vehicles of the corporation are parked here.

On Friday morning, the entire area was sealed and with the presence of the administration and the police, the municipal team started removing the encroachment. Since most of the shops has tin roof, they were demolished by running JCB.

The administration kept the entire area sealed for about three hours. The traffic was blocked from Shanti Palace to Jaisingpura. There was slight resistance from the affected shopkeepers and few of them tried to stop movement of JCB machines, but everything was settled soon.

Assistant commissioner Subodh Kumar Jain, ADM Narendra Suryavanshi, ASP Amarendra Singh, SDM Jagdish Mehra, CSP Pallavi Shukla and Vandana Chauhan and tehsildar Shrikant Sharma along with the force of more than four police stations were present. No senior official from the municipal corporation reached the spot in the morning. At around 8 am, UMC commissioner Kshitij Singhal arrived for a while and left. The additional commissioner or deputy commissioner did not even bother to visit the spot.

By 11 am, the entire area looked like an area hit by an earthquake. Broken iron sheets and debris was all that was left of the commercial outlets which once operated in the area. The shopkeepers were packing their goods and cursing the administration, said an affected shopkeeper.

Smart city will plant over 30,000 saplings here according to the Miyawaki method of Japan. A tender for plantation of 10,000 saplings in the first phase has been issued. Smart City administration wants to complete the plantation work before the end of the rainy season so this land has been freed.