Speaking on the occasion Nitin Gadkari announced that Ujjain-Jhalawad Road would be 4-lane up to 50 km from Ujjain and the Jaora road would be upgraded.

Distinguished guests light a lamp to open the launch of road projects, in Ujjain on Thursday. | FP Photo

Ujjain (Madhya Pradesh): Union Minister for Road Transport and Highways Nitin Gadkari laid the foundation stones of 11 road projects with a cumulative length of 534 km during a function organised at Makodiaam area here on Thursday afternoon. These projects will be constructed at an estimated cost of Rs 5,722 crore and will greatly boost the overall development of the Malwa region.

These projects are expected to benefit the entire Malwa-Nimar region, providing easy and safe transport for pilgrims and tourists, in turn saving time and fuel costs as well. It will also lead to increased employment opportunities with the development of the Ujjain-Dewas Industrial Corridor.

Speaking on the occasion Nitin Gadkari announced that Ujjain-Jhalawad Road would be 4-lane up to 50 km from Ujjain and the Jaora road would be upgraded.

He said, my ministry is ready to construct a flyover, airbus, ropeway and make bus ports that are similar to airports He announced that a 30-40 seater airbus would be launched in Ujjain for people wanting to go for a darshan at the Mahakaleshwar Temple.

He added that the Ujjain-Dewas Road would be fully four-lane and Rs 3,000 crore would be spent on constructing ROB in MP. He said the Narmada Express Way would be executed after extensive discussion and that the Delhi-Mumbai Road would go through Ujjain which will reduce the time to travel from Ujjain to Delhi to 6 hours and for Mumbai to 8 hours. If the MP government provides sufficient land then a logistic park would be developed on either side of the said road, the minister added.

CM Chouhan said that the projects launched today will pave the way for the all-round development of Malwa region. He said, there will be an exemplary show in Ujjain on March 1 on account of Mahashivratri as 11 lakh diyaas will be lit. He praised Gadkari as a very generous leader who gives more than double the demand. A leader should be like that who gives and does not argue that he doesn’t have money. Talking about the changes in MP the CM said, before 2003 we used to urge the Union Government to denotify national highways in the State. Now we are making more and more NHs. He demanded the launch of a mass rapid transport air bus in Ujjain so that people can directly reach Mahakaleshwar Temple through cable car. He also suggested that Ujjain and other cities should be encouraged to use new-age technologies to ease traffic woes and sought sanctioning of the Narmada Express Way between Amarkantak and Alirajpur.

Gadkari reached the holy city on Thursday Afternoon, late by one and half hours from his scheduled time. Thereafter, he went straight to Makodiya Aam Square to attend the foundation stone laying programme after worshiping at Mahakaleshwar temple. 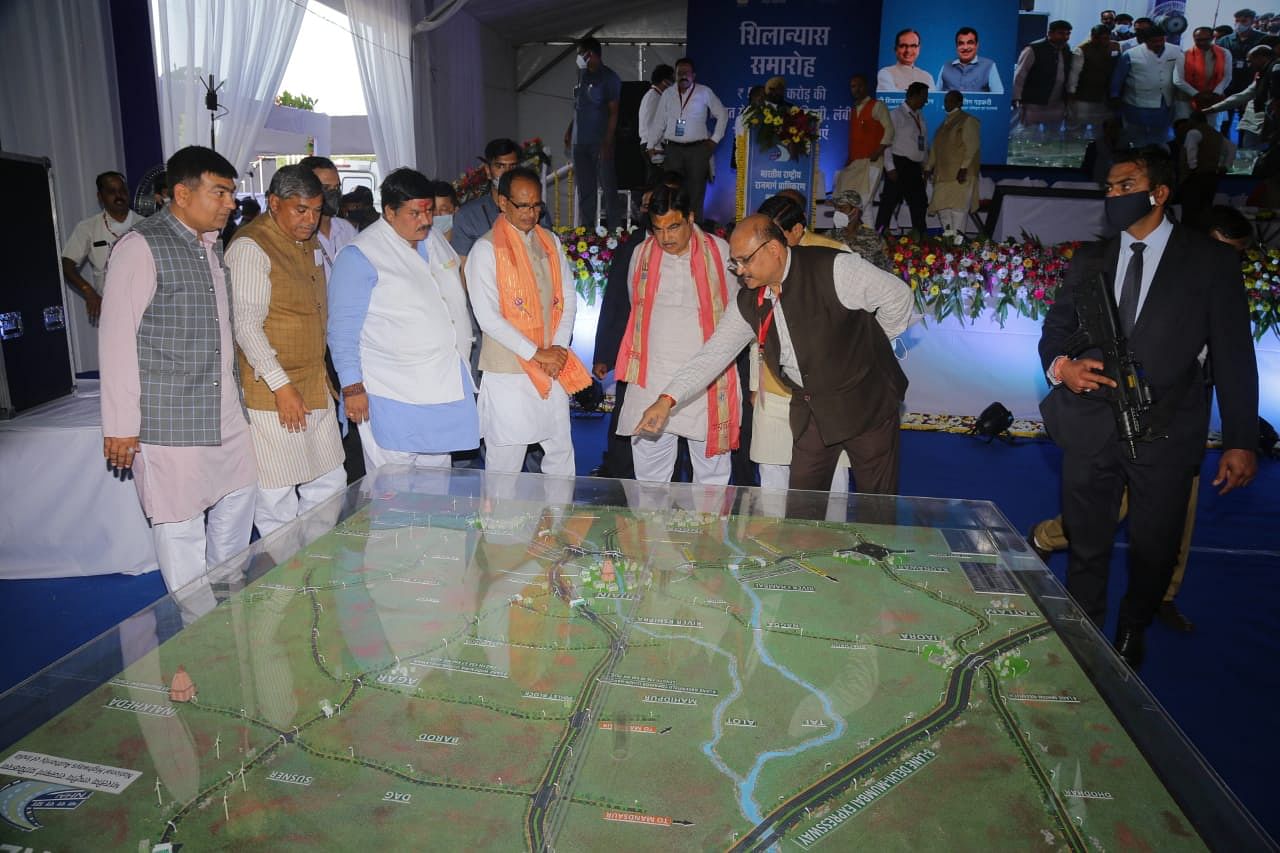 NHAI officials brief the Union minister and CM about the connectivity of roads after completion of the projects in Malwa region. | FP Photo

The 11 road projects which were launched on Thursday 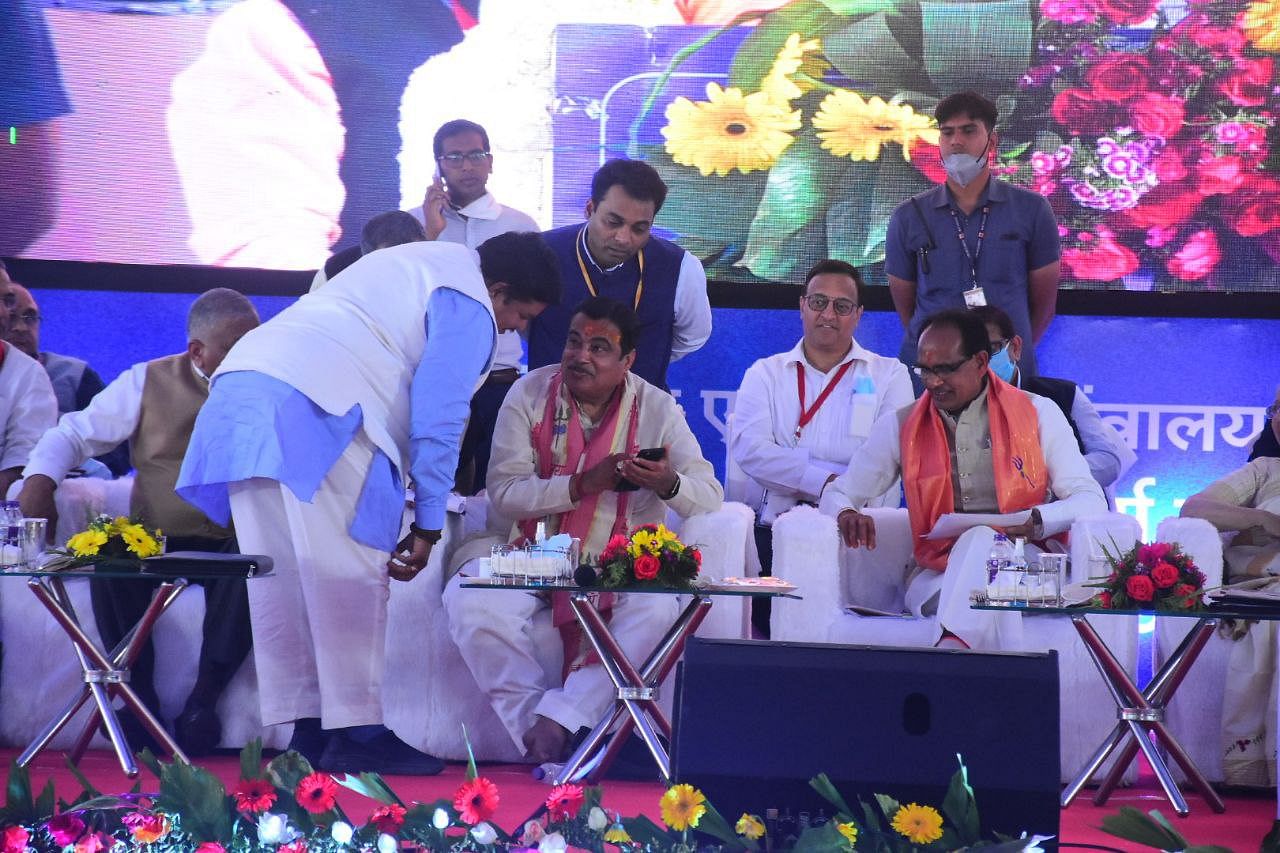 In his speech, Minister Nitin Gadkari said he himself has reduced his weight from 123 kg to below 100 kg and if Ujjain MP Anil Firojia reduced his weight he would provide Rs 1000 crore to Ujjain per 1 kg weight loss by the MP. During the function, minister Mohan Yadav was seen eager to secure a seat near the CM, but he was asked to on the third seat from the CM’s chair. Out of 4 Congress MLAs of the district, only Murli Morwal turned up at the venue. His son Karan Morwal is facing a rape charge. During the programme, Morwal was seen seeking some favour from the CM which gave rise to various speculations. 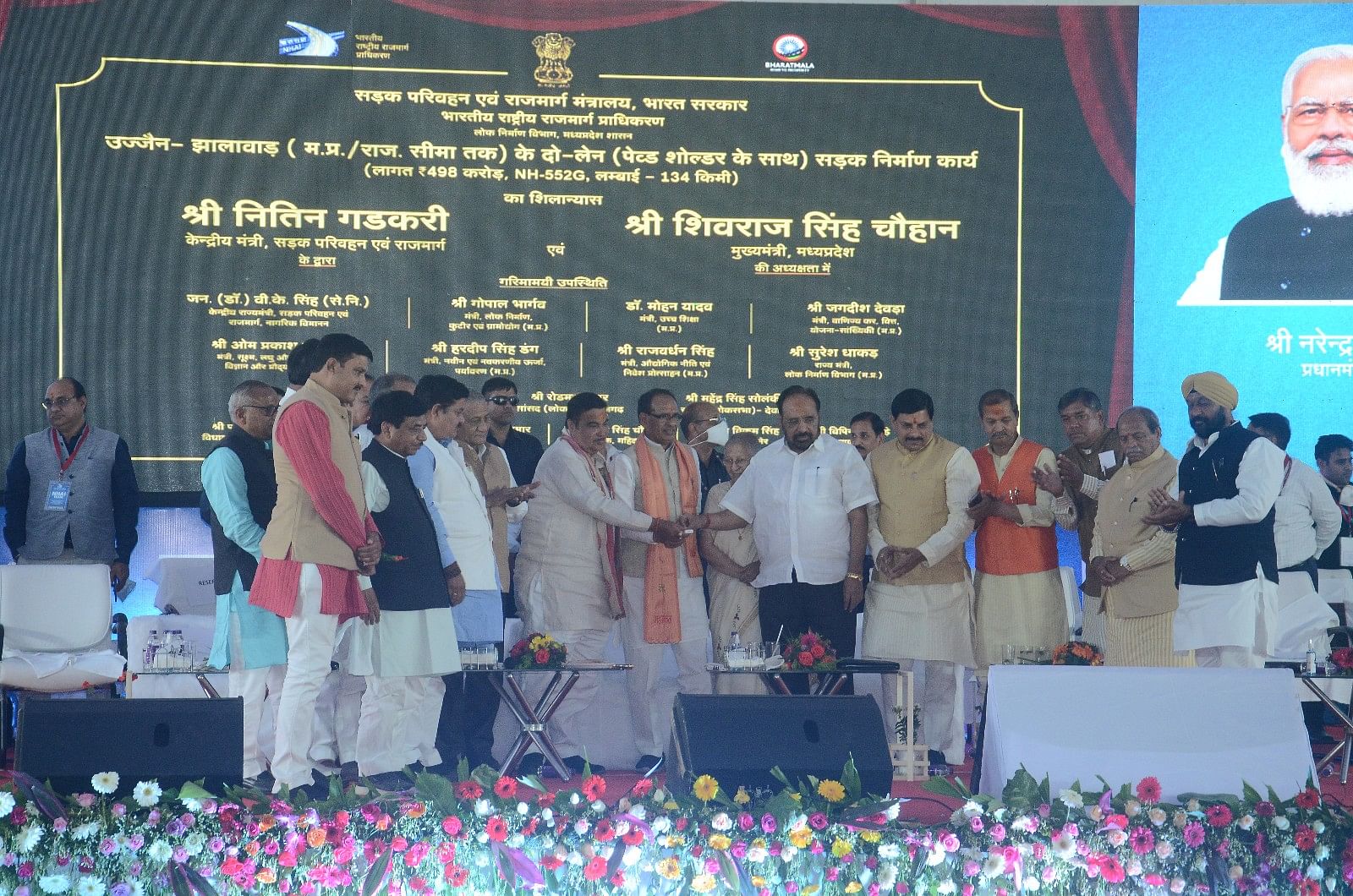