It appears that Rasoma Square has become the new spot for youngsters to showcase their talent, though it poses a risk for both the 'performer' and those driving on the road.
Staff Reporter 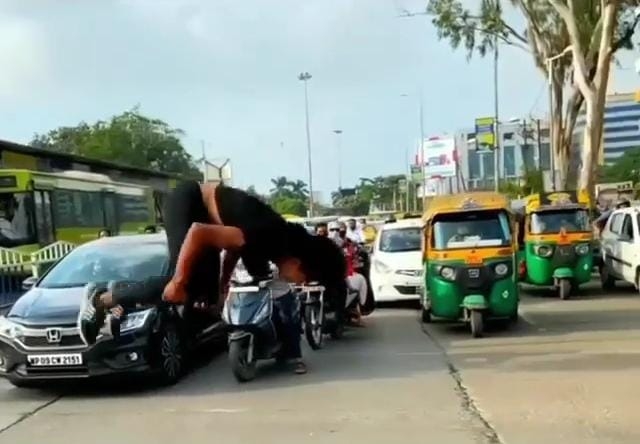 Indore (Madhya Pradesh): After fashion blogger and model Shreya Kalra's video showing her dance moves at Rasoma Square went viral on social media, another video of a youth doing summersaults at the same spot in the thick of traffic has surfaced. The police were unaware of this new video, but are investigating it.

It appears that Rasoma Square has become the new spot for youngsters to showcase their talent, though it poses a risk for both the 'performer' and those driving on the road.

In the video of the boy that went viral, he could be seen jumping and somersaulting at the Rasoma Square when the signal had turned red. The video is of Aashish Yadav who is Instagrammer and Youtuber.

Shreya's video went viral on the internet in which she danced and gave a dare of ‘doing a trend in a public place’. The video was uploaded three days ago was viewed by over 2.5 lakh people and liked by over 22 thousand people.

Shreya's traffic signal dare was her third dare in a row. The other two dares were ‘Try to sneak in food into the movie’ and ‘Call your ex and tell him you still love him and want to marry’. In the movie dare, she taped a bowl on her stomach keeping biscuits and other such things inside it and pretended to be ‘fat or pregnant and entered inside the theatre and took out the packets. In another dare, she called someone and shared her conversation on the internet as per the dare.

Shreya is a fashion blogger and a writer by profession. She worked as a writer for an online portal. She has been seen in a TV reality show named Roadies Revolution. According to information, she is born and bought up in Australia.

The ASP (EAST ZONE-2) Rajesh Raghuwanshi said that police are taking immediate action after the matter came Home Minister Narottam Mishra took cognizance. A case under section 290 of IPC has been registered against the girl. She is not in Indore and she has been called by the police for further legal proceedings

DSP (Traffic) Umakant Choudhary who is in charge of the area where the incidents took place said that police will take strict actions on all such people who create ‘tamasha’ on the road.