He demanded construction of a three-layer overbridge in front of the Best Price as often there is a traffic jam in the area.
Staff Reporter 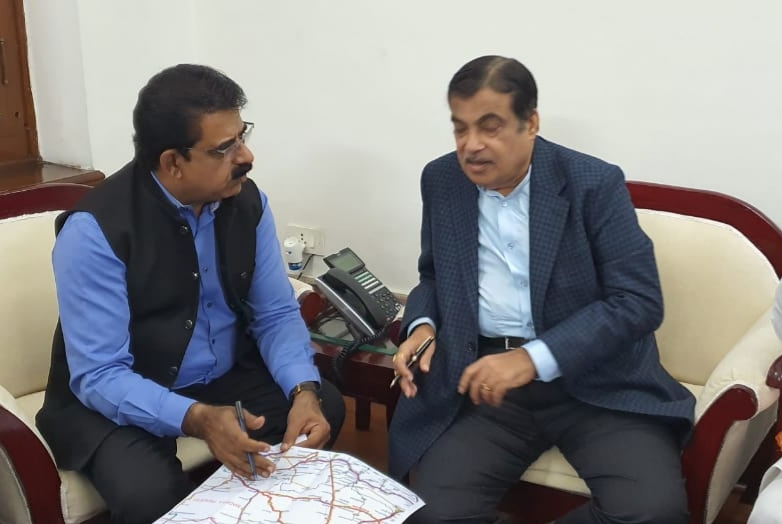 Indore (Madhya Pradesh): Member of Parliament Shankar Lalwani urged Union Surface Transport and National Highway Minister Nitin Gadkari to build flyovers on the city's Bypass. MP Lalwani met Gadkari at his residence in New Delhi and presented a memorandum to him in this regard.

He demanded construction of a three-layer overbridge in front of the Best Price as often there is a traffic jam in the area. Lalwani demanded making Indore-Harda road a National Highway. He also requested Gadkari to build a flyover at Rau junction. He briefed the Union Minister about the frequent traffic jams in Rau junction as traffic from Pithampur, Mhow and Indore merges here.

Lalwani told Gadkari that heavy traffic flow often leads to accidents there, so it is very important to build this flyover. He also stressed on the need for construction of a flyover at Ralamandal junction. He apprised the minister about the dilapidated condition of the 22-km service road along the Bypass and said that there is always a possibility of accidents due to potholes, so the repairing of the service road is necessary.

Lalwani met Union Urban Development Minister Hardeep Singh Puri also in New Delhi. He demanded the introduction of the Regional Rapid Transit System. In such a situation, Indore via Mhow, Pithampur, Depalpur, Sanwer, Ujjain, Dewas should be connected with Indore through Regional Rapid Transit System (RRTS). He apprised the Union Minister that the city is a major center of education and health, so a lot of pressure remains here. Lalwani said that RRTS will reduce the burden on the roads and also reduce accidents.