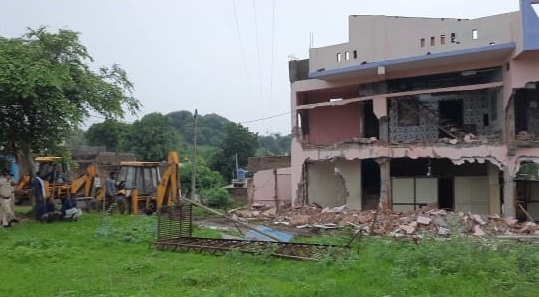 Mortaka (Khandwa district): A team of the police department and that of the local administration have demolished a hotel owned by Kalka Prasad Jailwal, the main accused in the spurious liquor case.

Spurious liquor recently claimed two lives. Chaos prevailed at the spot where the hotel is located, as female members of the Jaiswals protested against the demolition of the hotel.

All the women lay before the JCB machine brought to raze the hotel. The female officers present on the spot shooed away the crowd to ensure demolition of the building.

The officials of the administration told the Free Press that the hotel had been constructed on government land against the norms.

Officials of the police department said t hat they have come across a huge cache of raw material, equipment and chemicals which were used to make spurious liquor.

A team, comprising the officials of the police led by sub-divisional magistrate Chandra Singh Solanki, sub-divisional officer (police) Rakesh Pendra, tehsildar Udai Mandloi and a large number of police personnel carried out the demolition. Five JCBs have been pressed into service.

Meanwhile, locals said the place where he runs a liquor manufacturing unit is situated barely 200 metre from the Mortaka police outpost.

Locals claimed that Jaiswal had bought 104 acres to manufacture liquor.