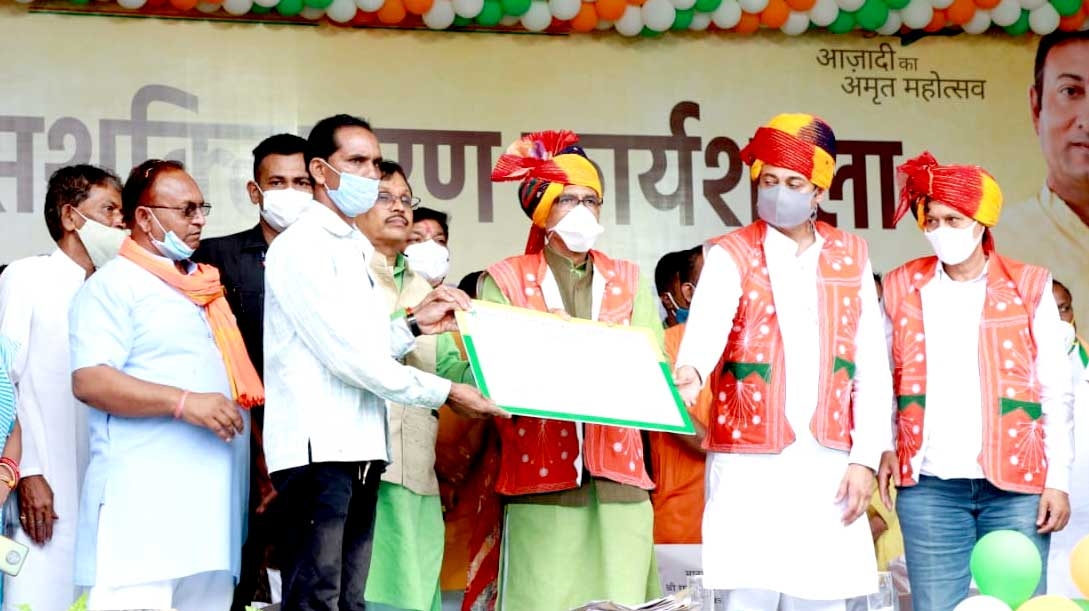 Alirajpur (Madhya Pradesh): Chief minister Shivraj Singh Chouhan during his day-long Jan-Darshan Yatra to Alirajpur district visited many villages in Jobat Assembly constituency and interacted with the people there.

We provide electricity, water at every door step

Addressing a gathering at Jobat, Chief Minister Shivraj Singh Chouhan said that his government believes in development works. Therefore, basic facilities have been arranged by laying a network of roads in the rural areas. Now enough electricity is being available for consumers in villages. Pradhan Mantri Awas Yojna is providing permanent shelter to the poor.

Besides, those who are still missing in the survey, their names will be included in the list of housing plus, so that they too can get a permanent home. Similarly, those people who do not have the eligibility slip yet, are also being given eligibility slip, so that they can get 10 kilo ration free from Prime Minister and Chief Minister Anna Yojana along with rice, salt, rice, salt at Re 1 kg from ration shop.

He directed the district administration that with complete transparency, it should be ensured that the poor get ration from the fair price shop.

During the meeting, the chief minister told that although the corona is completely under control in the state, it is very important to be careful. For this it is necessary to get all the people vaccinated.

People who have not yet had a single dose of vaccination, must get their vaccination done. He also urged the party workers to encourage the people for vaccination so that 100 per cent of the people of the entire state would be vaccinated.

Chief minister directed the district administration to make arrangements for the training of NEET and JEE examination, so that the local children can also get an opportunity to move forward.

Chief Minister flagged-off the cleanliness, dengue awareness chariot in Jobat. After that he started the program by worshiping the girls. He also planted a sapling there.

Interacts with members of SHG

CM interacted with the women of self-help groups. He released the Bayra brand book during the women empowerment workshop organised in Jobat. Chief minister assured the successful entrepreneurial women that the product of Bayara brand would be recognised at the national and international-level.

He directed that Hindi copies of the book should also be made for the benefit of women at local level. He also appealed to the vast women's groups present that they also joined the livelihood mission so that they and their area can develop. Madhya Pradesh: Notification for election to Rajya Sabha issued, poll to be held on October 4