Pandhana (Madhya Pradesh): An Indore Lokayukta team, on Tuesday, trapped an assistant sub-inspector (mandi) when he was accepting a bribe of Rs 13,000 from a complainant. Lokayukta DSP Mukesh Kumar Baghel said his team had trapped ASI Sunil Vaskale. The team booked him under relevant sections of the Prevention of Corruption Act after preparing a panchnama.

DSP Baghel said that, out of this Rs 13,000, ASI Vaskale was to give Rs 5,000 to the mandi secretary. The Lokayukta has registered a case against three assistant sub-inspectors in the matter.

The officer said that, recently, a trader, Mahendra Agrawal, a resident of Borgaon Bujurg village, under Pandhana tehsil of Khandwa district, had lodged a complaint with the Indore Lokayukta.

The complainant stated that, on the basis of the rules laid down by the government, the traders were given market licences of the purchasing centre for buying agricultural produce from their place in 2020 and, at that time, no time period had been fixed.

Meanwhile, due to the closure of the portal on June 31, 2020, without any prior notice, some of their agricultural produce was left for sale. They again sold the produce by depositing the market fee.

The three assistant sub-inspectors of the Krishi Upaj Mandi checked the stock in the godown and found 141 quintals of extra maize. For this, Rs 80,000 was demanded as bribe by the assistant sub-inspectors, which information was passed on to the Lokayukta SP, Indore. After negotiations, they were ready to settle the issue for Rs 15,000. It was agreed that Rs 3,000 would be given to the ASI and Rs 5,000 to the mandi secretary. 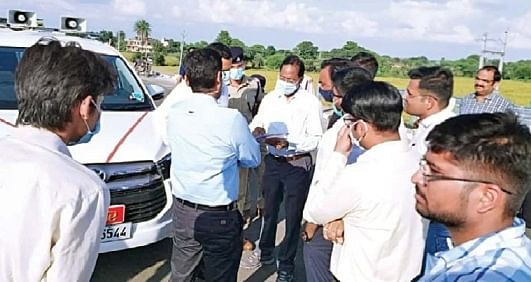