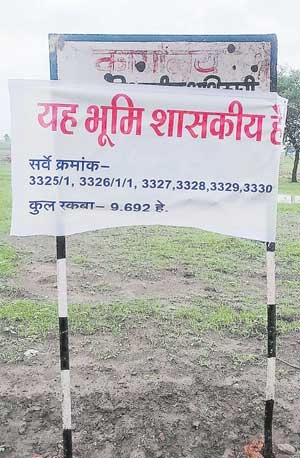 Indore (Madhya Pradesh): As part of the ongoing drive against land mafia, the district administration took possession of 29 acre of land grabbed by land mafia Deepak Madda through Trishala Grih Nirman Society, on Tuesday. The market value of the land is estimated to be over Rs 750 cr.

The district administration had already declared this land as government land through an order passed on Monday by the court of additional collector Abhay Bedekar. An FIR was also lodged against Madda, Dilawar Patel, Sohrab Patel, Islam Patel and Zakir under sections 420, 467, 468, 120B of IPC at Khajrana police station on Monday.

On the instructions of collector Manish Singh, ADM Abhay Bedekar and SDM Anshul Khare reached
on the spot under the Khajrana police station and took possession of the land and later handed it over to IMC.

Originally, it was ceiling land that had been freed under the Land Ceiling Act, 1976 and it was released by the government to members of the Nyay Nagar Grih Nirman Cooperative Society for residential housing. Later, the land was fradulently included in the Trishala Grih Nirman Society owned by Madda allies Deepak Sisodia.

ADM Bedekar informed that Khajrana resident and farmer Sohrab and Islam son of Alam had complained to collector Manish Singh about the illegal sale of the 29-acre ceiling land to Trishala Grih Nirman.