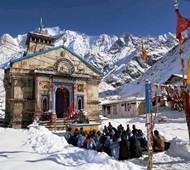 Indore (Madhya Pradesh): The telecast of the programme of the unveiling of statue of Aadi Shankaracharya in Kedarnath by Prime Minister Narendra Modi on Friday, will be made in four temples of the city.

According to the instruction of the Culture Department of the State Government, programmes will be organised at the places fixed by the State Government. During this, lamp lighting and worships will be performed in front of the picture of Acharya Shankar. Abhishekam of
Shiva and Acharya Shankar, recitation of hymns composed by Shankaracharya, parayan of commentary texts should will also be done.
The programme to unveil the statue of Acharya Shankar in Kedarnath by the Prime Minister will be broadcast online on the big screen. The programme will be organised in coordination with local public representatives and spiritual organisations.

Programs will be held in 4 temples

The telecast of the PM’s unveiling program will be made in the four temples of the district. These are Mahadev Temple at Pardeshipura, Bhuteshwar Mahadev, Shiv Mandir at Devguradia and Kashi Vishwanath Temple at Sanwer Road.

Programmes to be held in Omkareshwar