Notwithstanding its limited practice, the irrigation technique is so effective that farmers here have been successfully using it to grow wheat and other crops during the rabi (dry) season with adequate water.

Barwani (Madhya Pradesh): For the tribal population of most parts of Paati block in Barwani district, nestled in the Satpura Range of Madhya Pradesh, electricity continues to be a luxury.

Connectivity to the grid is erratic, if at all. Hence, residents of this drought-prone region - where rain-fed agriculture is a common means of livelihood for most - prefer to avoid depending on electricity to run tubewells for irrigation.

However, centuries ago, with considerable ingenuity, the tribal community devised an eco-friendly "paat" system of irrigation - it facilitates the transport of water over long distances to farms at high altitudes, without the need for electricity or any form of fuel.

The "paat" system not only leaves the groundwater level undisturbed, but is also reliable and inexpensive. Thus, it is a boon for the marginal farmer, who must keep his expenses in check when operating in a region where groundwater can be struck only at 1,000 ft and lower, and it's expensive to install borewells.

Moreover, the Paati block is a hilly region prone to very high temperatures in summer, with 95 per cent of its area comprising undulating hills and just 5 per cent composed of scattered flat land. The name "Paati", too, is derived from this distinctive "paat" irrigation technique, which gave it a unique identity and is currently practised in only the Barwani, Dhar and Alirajpur districts of Madhya Pradesh.

Notwithstanding its limited practice, the irrigation technique is so effective that farmers here have been successfully using it to grow wheat and other crops during the rabi (dry) season with adequate water.

For centuries, "paat" has been the mainstay of Adivasi farmers in these central parts of India. It was a means of making the best of nature's bounty, without interfering with or undermining it.

The technique involves building a temporary structure - a "paal" (earthen wall) - on a flowing nullah (mountain stream), or any resource that has running water till February. It's essential that the stream is at a level higher than the farms.

The paal diverts this water to the fields over long distances, which may range up to 4 km, with a single nullah irrigating nearly 65 farms or 100 acres of land at a time. Being at a greater height, the water flows into the fields at full speed and force.

The technique was rejuvenated in these parts of India between 1985 and 2000, when the region was severely affected by drought - like many other parts of the country. The drought also affected "paat" irrigation, since sources of water dried up, which in turn affected standing crops in the farms. This was when the Adivasis, with the help of the Jagrit Adivasi Dalit Sanghatan, built 14 bunds across nullahs in nine villages - Borkhedi, Limbi, Bana, Gudi, Piparkund, Kalakhet, Kandara, Aavali and Swariyapani - and dug several ponds to ease their problem.

Recalling the initiative, Manthan Adhyayan Kendra in-charge M Rahmat told 101Reporters, "These hard-working Adivasis built the earthen bunds and ponds through shramdaan [voluntary labour], without any help from the government."

In the past two decades and more, the tribal community has made use of both nullahs and ponds to irrigate their farms using the "paat" technique.

Betting on a revival

Although this method of irrigation has been around and effective for centuries, the arrival of electricity in neighbouring villages is prompting younger farmers to move away from the "paat" technique.

Anja Gathia of Aavli village says: "One can tap into groundwater any time through the year. Electricity has reduced the hard work farmers needed to put in for 'paat' irrigation. This accounts for the gradual disappearance of 'paat' irrigation."

He believes that "if 'paat' survives in the neighbouring district of Dhar, it's mainly because it's backward, and that several other villages are too remote or poor to avail of grid connectivity".

"Therefore, farmers continue to fall back on 'paat' to irrigate their farms," he adds.

But Adivasi elders Pandit Maita, Dhama Anja, Natadiya, Subala and Bahadariya have not forgotten the drought-induced catastrophe they had suffered decades ago, and how it was this "paat" technique that had aided their survival.

Putting her faith into action is Kumtibai Maita Barela. She had acquired this irrigation skill from her husband and is now transferring her knowledge to her children. Aavali village, 4 km from the tehsil headquarters in Paati, is a typical tribal village inhabited by the Barela people, who use the "paat" technique extensively to irrigate their farms.

Kumtibai and her family here have been bringing water to their farm, over 2 km from a nullah from Sawariyapani, using "paat" for decades. The water irrigates their land till February every year.

However, transporting water using the "paat" system can be a difficult and tedious process. Since it involves building temporary structures on the nullah, farmers may often be faced with the breaking down of the paals erected. They also need to keep an eye out for any obstruction, lest it affect the flow of water into their farms.

Moreover, it can get difficult to keep up the hard work involved in maintaining the "paals", but the generational practice in a drought-prone region is still being carried forward. The Manthan in-charge emphasises that "to balance the groundwater table, this traditional irrigation method must be continued".

"The government should include the construction and maintenance of the 'paat' system under MGNREGA. That would generate livelihood for the farmers here as well as conserve groundwater. Even the younger generations would carry it forward then," he concluded.

Read Also
Barwani: No one has a right to occupy government buildings, says Collector 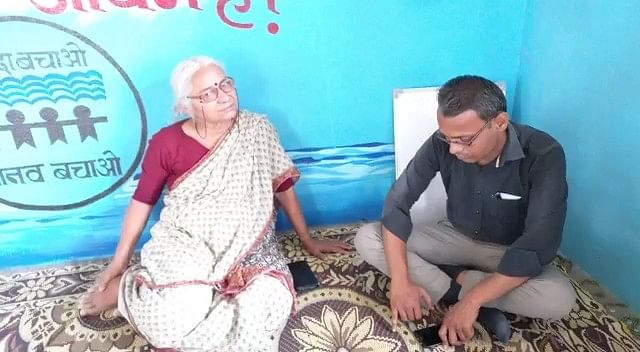