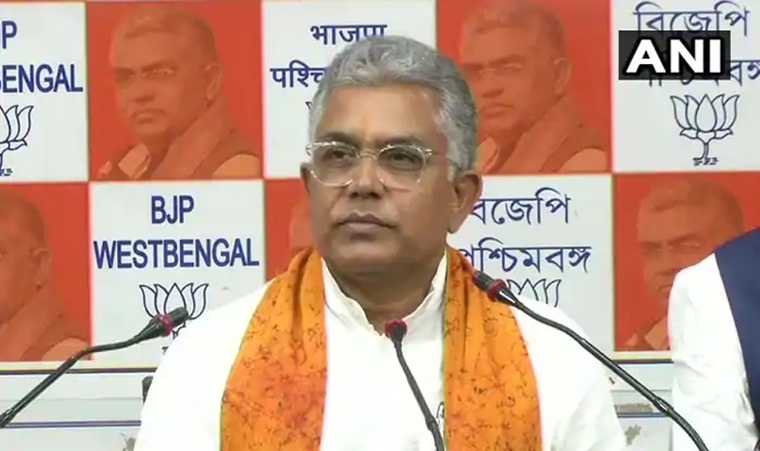 Kolkata: A day after TMC national secretary Abhishek Banerjee claimed that the BJP is playing ‘vindictive politics’, West Bengal BJP chief Dilip Ghosh countered it by stating that TMC is slapping cases on BJP leaders after Leader of Opposition Suvendu Adhikari defeated her in Nandigram.

“The BJP leaders are being harassed in West Bengal and everyone can see it. So many BJP cadres have died in post-poll violence,” said Dilip.

Slamming Abhishek for his comment that at least 25 BJP MLAs are in touch with TMC, Ghosh said that Abhishek should first think of saving their leaders from CBI and Enforcement Directorate.

“Abhishek couldn’t digest the nine hours quizzing of ED. He should first take care of his partymen before thinking of the BJP leader’s defection. Time will tell who will be the winner and who will lose,” slammed Dilip.

Asked about TMC leader Muikul Roy’s claim that Union Home Minister Amit Shah and his son Jai Shah is minting money, to which the West Bengal BJP chief said that people should also inquire about the property of TMC MP and Chief Minister’s nephew Abhishek Banerjee.

“Mamata Banerjee herself claimed that once they were so poor that they had to sell off their ornaments and now how Abhishek Banerjee did so much property that Harish Mukherjee road is now converted into Banerjee colony. Jai Shah is son of the Union Home Minister,” claimed Ghosh.

Meanwhile, according to BJP sources, the state chapter had sent six probable names for contesting against TMC Supremo Mamata Banerjee in Bhabanipur constituency.

However, Ghosh said that names are sent to the national capital and soon will be decided by the BJP Parliamentary committee.