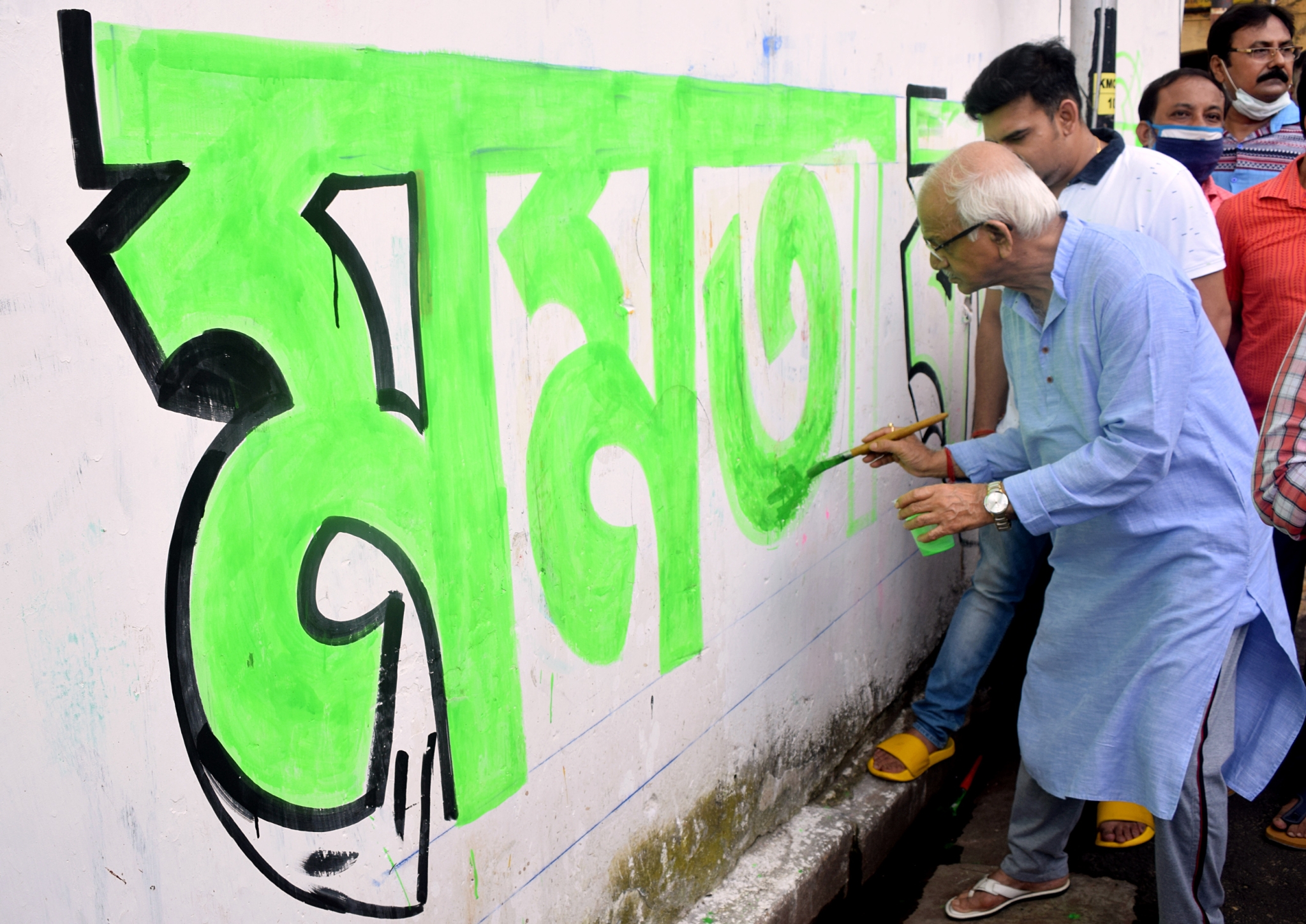 West Bengal, Sep 07 (ANI): West Bengal Agriculture Minister Sovondeb Chatterjee paints a wall with graffiti during a campaign in support of West Bengal CM Mamata Banerjee ahead of the by-elections, in Kolkata on Tuesday. | (ANI Photo)

Kolkata: A day before starting the poll campaign at Bhabanipur assembly constituency, Chief Minister Mamata Banerjee made heavyweight TMC leaders in charge of eight wards under the assembly segment.

According to TMC sources, Firhad Hakim, Kartick Banerjee, Partha Chatterjee, Subrata Mukherjee and Debasish Kumar are given charge of the eight wards.

The TMC sources also confirmed that the poll campaign will start with party workers meet at Chetla.

Meanwhile, West Bengal agriculture minister Sobhandeb Chattoapdhyay who had resigned from the MLA post to vacate it for TMC supremo Mamata Banerjee was seen writing her name as a part of wall graffiti.

Talking to the media, Sobhandeb said that Mamata Banerjee will win by a huge margin.

“Deposit of opposition candidates will be forfeited as no one can win against Mamata Banerjee. Everyone is there with didi as all are aware of the developmental schemes started by our Chief Minister,” said Sobhandeb.

It is pertinent to mention that invoking Bengali sentiments, the TMC started a new chant ‘Unnayan Ghore ghore, ghorer meye Bhabanipure’ (Development at every household and the daughter of West Bengal is in Bhabanipur).

BJP central leader and IT cell head Amit Malviya took to Twitter and claimed that Mamata Banerjee will lose from Bhabanipur constituency as she had lost in Nandigram to BJP leader Suvendu Adhikari.

“Staring at an imminent defeat, Mamata Banerjee abandoned Bhabanipur and fled to Nandigram, only to lose to BJP’s Suvendu Adhikari. How does she hope to win from Bhabanipur now? She will meet the same fate as Nandigram in this bypoll. It is a contest BJP will enter to win,” read the tweet.

West Bengal BJP Chief Dilip Ghosh said that the saffron party will announce their candidate’s name in a day or two.

Notably, the bypoll of the Bhabanipur constituency along with assembly polls of Samserganj and Jangipur will take place on September 30.