After the fist fight incident video from Bangkok-Kolkata THAI Smile Airways  flight, another undated video of passengers fighting mid air has turned up online. This time the Indian flyers are seen quarrelling and using cuss words on an IndiGo flight. The flight number or location of the incident is not known yet.

Two young men standing in the passage of the aircraft and a middle-aged man seated on the middle seat of the aircraft are seen having a heated argument. They call each other '2 rupees people' and hurl swears at each other. The two men are heard saying, "Your father is a cheap man (two rupees people) I don't get into conversation with people like you. Get lost." The middle-aged man in the video goes on to abuse the two guys who at one point seem to become violent but then walk away abusing the man who in the end again calls them '2 rupees people'. Some passengers are even heard commenting and expressing exasperation on the youngsters abusing a rather older man.

At one point it even appears that the fight will get physical as the man standing up shoves the middle-aged man's hand while swearing at him. 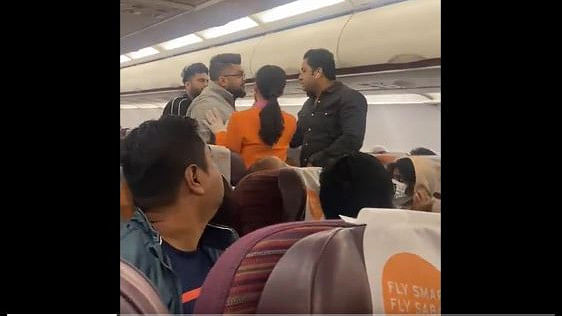 No crew members seen in the vicinity of the fight

The fight appears to have started over seats but it cannot be confirmed as of now. Although the passengers involved in the quarrel don't look like they are seated near each other as the younger group is seen moving towards their seath along with a bunch of other passengers. The plane appears to be gearing up for take off as all the passengers are not seated and many are seen boarding the flight.

No crew members are seen in the vicinity of this quarrel. Towards the end of the video, a crew member turns up, but by that time the quarrel has dialled down as the group moves ahead to probably take their seats.