The Vice President was the Chief Guest at the celebrations and released the much awaited book ‘Death – An inside story’ authored by Sadhguru, Founder, Isha Foundation.

Coimbatore: The Vice President of India Venkaiah Naidu joined thousands of people in celebrating Mahashivaratri at Isha Yoga Center this year. Isha celebrated its 26th Mahashivaratri in the presence of Adiyogi with a nightlong cultural extravaganza that began at 6 p.m. on 21 February and ended at 6 a.m. on 22 February.

The Vice President was the Chief Guest at the celebrations and released the much awaited book ‘Death – An inside story’ authored by Sadhguru, Founder, Isha Foundation.

Sadhguru welcomed the Vice President at the event. “It is a privilege for us today, to have our beloved Vice President of India on this night,” said Sadhguru and invited Naidu to light the Maha Yoga Yagna to symbolize the spread of Yoga through the world. Isha FoundationEarlier, the Vice President was given a tour of the Isha Yoga Center by Sadhguru and participated in a process to cleanse the five elements, known as Pancha Bhuta Aradhana, at the Dhyanalinga Yogic temple. The process was conducted by Sadhguru. The Vice President also visited the Linga Bhairavi Devi temple. Addressing the audience with Adiyogi in the backdrop, the Vice President said, “Adiyogi is an inspiration and a representation of Yoga which is not a belief but a technology to transform yourself.” Naidu congratulated Sadhguru for organizing Mahashivaratri on “such a grand scale” and making it “a truly global festival.” Referring to Shiva as a Being close to Nature, the Vice President took the opportunity to mention Isha’s ecological efforts such as greening the Velliangiri Mountains and the movement to revitalize India’s rivers. Shri. Naidu spoke of the significance of the Cauvery Calling initiative inviting everyone to “join this movement for our own future.”

Sadhguru spoke about how the human system can benefit by staying awake on this night: “The idea of Mahashivaratri is that on this day, the planetary positions, particularly in the northern hemisphere are such that there is a natural upsurge of energy in the human mechanism. 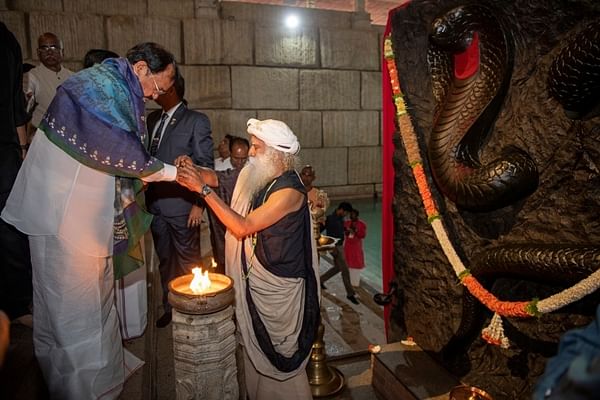 This is not about worship, this is not about a particular belief system. This is about enhancing the human beings that we are. It is my wish and my blessing that this night should not be just of wakefulness but also of awakening.”

An eclectic mix of artists that included a Lebanese band, Parthiv Gohil and his troupe, singer Karthik, Kabir Cafe and Sounds of Isha as well as several classical dancers including students of Isha Samskriti and folk artists performed through the night. The performances were interspersed with discourses by Sadhguru as well as meditation sessions. Thousands of people participated either in person or through live relay in the much anticipated powerful midnight meditation led by Sadhguru. For those who could not be present at the venue, over 100 television and web channels streamed the event live enabling them to participate virtually, reaching the event to a few million people worldwide. Sadhguru thanked channels relaying the event: “Those of you not physically here, but are with us online or watching television...my gratitude to all the channels who are taking it to the people across the world.”

The Maha Annadanam, which is an offering of food to everyone who visits the Center on Mahashivaratri, was served to all visitors. 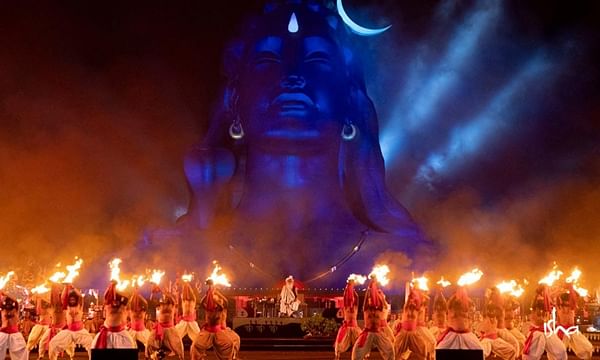 Mahashivaratri is significant because of the immense spiritual benefits it offers due to natural planetary positions. On this night, the northern hemisphere of the planet is positioned such that there is a natural upsurge of energy in the human system, pushing one towards their spiritual peak.

It is therefore considered important to stay awake with the spine erect to benefit from this natural upsurge of energy. The forces of the night are agnostic to faith or religion making Mahashivaratri a universally significant night for all human beings, especially those on the spiritual path.