HomeSpiritualityMaha Shivratri 2020: 4 Shiva stories to keep you awake on the auspicious day

Maha Shivratri 2020: 4 Shiva stories to keep you awake on the auspicious day

In the yogic tradition, there have been numerous Shiva stories that impart invaluable wisdom in a dialectical fashion. Here are four such Shiva stories.

Story 1: Shiva and the Bullock Cart

Sadhguru: It happened some three hundred years ago. There was a devotee in the southern regions of Karnataka whose mother was ageing. She wanted to go to Kashi and die in the lap of Vishvanath, the lap of Shiva. She had never asked for anything in her life but this one thing, she requested from her son. She said, “Please take me to Kashi. I’m getting old. I want to go there and die.”

"I do not know because I did not see him. I only saw a cloak and there was no face. There was nothing, it was empty.”

The man took this old mother and started walking through the jungles from southern Karnataka to Kashi – a long distance. Being an old lady, the mother fell ill. So he carried her on his shoulder and obviously he was soon sapped of energy.

The only way he could keep himself going was by pleading, “Shiva, please do not let me fail in this one endeavor. This is one thing that my mother asked, let me fulfill this. I want to take her to Kashi. We are only coming there for you. Please give me the strength.”

Then as he was walking, he heard a bell, like when a bullock cart comes behind you. He saw a bullock cart drawn by a single bull coming out of the mist, which was strange because in that region, you will see a single bull pulling a cart only when it is travelling a short distance.

When the travel is over long distances, through forests, it is always two bulls. But when you are so tired, you do not care about these nuances. As the cart came closer, he could not see the face of the driver as the driver was cloaked and it was misty. The man said, “Please, my mother is not well. Could we can ride on your empty cart?” The man nodded. Both of them got on and the cart traveled on. After sometime, the man noticed it was too smooth a ride for a forest track. Then he looked down and noticed that the cart wheels were not turning. They were still. The man returned to his village. People thought, “He has come back so soon. He must have dumped his mother somewhere. He did not take her to Kashi.” They asked him, “Where did you dump your mother?” He said “No, we did not have to go, Shiva came for us.” They said “Rubbish!” He said, “It does not matter what you think. He came for us and that is all. My life is lit. I know that within myself.

If you do not know. it is up to you.” Then they asked, “Okay, then show us something. Somehow show it to us that you actually saw Shiva. That he came for you.” He said, “I do not know because I did not see him. I only saw a cloak and there was no face. There was nothing, it was empty.”

Read Also
Mahashivratri 2020: Shiva Temples you can visit in and around Mumbai Then everyone suddenly noticed that this man was not there. They saw only his clothes. He became a great sage in South India. Wherever he went, people recognized him as an empty face.

Story 2: Malla: A Shiva Devotee and a Thief 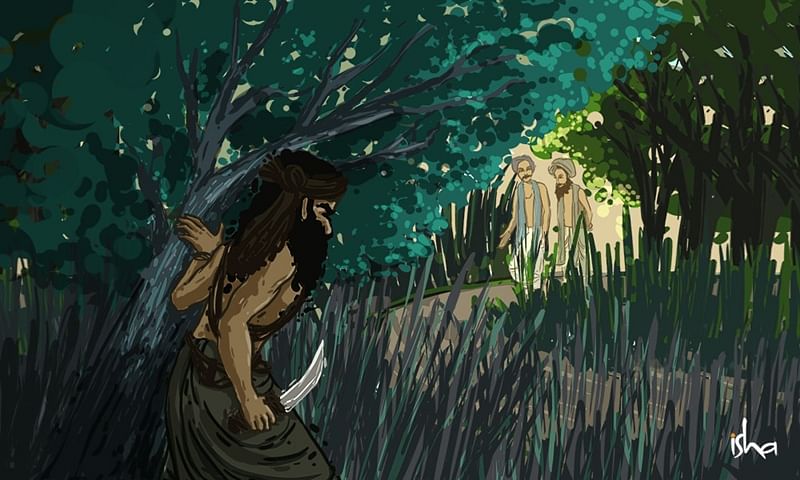 Sadhguru: Let me tell you of one yogi who lived very close to the place where I was born. I had heard about this person and the phenomena that happened there, but as a youth I did not pay much attention to it. It sort of gave me a kick, but I did not give much more importance to it at that time.

"Shiva was a hunter. He snared not just animals but human beings too."

There was a devotee who lived about 16 kilometers from Mysore, on the outskirts of the now-famous Nanjangud. His name was Malla. Malla did not belong to any tradition or know any formal way of worship or meditation. But right from his childhood, if he closed his eyes, he only saw the image of Shiva.

Maybe a devotee is not a good enough word for him. There are millions like him. They are prisoners of Shiva. They have no choice. Maybe I also got trapped by him. We did not seek him – too arrogant to seek anything, but trapped by him. Shiva was a hunter. He snared not just animals but human beings too. This was one more.

Malla knew nothing but Shiva. He did not learn any particular trade or craft and he grew wild. It did not occur to him that it would be wrong if he stopped someone and took whatever he needed from them. So he did just that, and got branded as a bandit.

He became a regular bandit on the forest pathway which people had to use. The place where he used to collect his “toll” came to be known as Kallanamoolai, which means “a thief’s corner.

” Initially people cursed him, but when the end of the year came, every paisa that he had collected from people was spent on celebrating Mahashivratri. He threw a huge party!

So after a few years, people recognized him as a great devotee and started contributing voluntarily. Those who did not contribute voluntarily, he had no qualms about encouraging them!

A few years later, two yogis who happened to be brothers came this way, and saw this man who was a bandit but a great devotee. They told him, “Your devotion is fantastic, but your ways are hurting people.” He said, “I am only doing it for Shiva, what is the problem?” They convinced him, took him aside and put him into other systems, and renamed the place from Kallanamoolai to Mallanamoolai. Even today it is called Mallanamoolai. And the Mahashivratri event that he celebrated evolved into a big institution in that place.

Within about a year-and-a-half from the time he gave up his banditry and sat with these yogis, he attained Mahasamadhi. After they released him like this, these two yogis also sat down and left their body on the same day. Today there is a very beautiful shrine built for these people, still called Mallanamoolai, on the bank of river Kabini.

Sadhguru: Kubera was the king of Yakshas. Yakshas are intermediate life – they are neither life here nor have they become afterlife – they are intermediate. The story goes that Ravana expelled Kubera from Lanka, and Kubera had to flee to the mainland. Out of desperation for his lost kingdom and people, he started worshipping Shiva and became a Shiva bhakta – a devotee of Shiva.

"He showed Ganapati and said, “This boy is always hungry. Feed him well.”

Shiva, out of his compassion, gave him another kingdom and all the wealth in the world and Kubera became the richest being in the world. Wealth means Kubera – that’s how it is seen.

Shiva of course never picked up anything, except the sacred ash that was offered to him. But Kubera felt like a great devotee because he was offering so much.

One day, Kubera came to Shiva and said, “What can I do for you? I want to do something for you.” Shiva said, “Oh, you cannot do anything for me. What can you do for me? Because I don’t need anything, I’m fine. But take my son.” He showed Ganapati and said, “This boy is always hungry. Feed him well.”

Kubera was alarmed. “Stop it!” he said. “If you eat like this, your belly will burst.” Ganapati said, “Don’t you worry. See I have this snake as my belt. You don’t have to worry about my belly. I’m hungry. Serve me. You were the one who said you’ll take care of my hunger!”

Kubera spent all his wealth. They say he sent people to other worlds to buy food, and they served food. But Ganapati just ate and said, “I am not yet full, where is more food?” Then Kubera realized the smallness of his mind and bowed down to Shiva, “My riches, I know, are not equal to the speck of dust for you. I made the mistake of thinking I am a great devotee, just giving back a little of what you have already given to me.” And his life moved in a different direction from that moment. We are talking about a science and a technology through which we can make every aspect of our life into an ultimate possibility.

"By now Parvati was fuming, so Shiva pulled her into himself and made her a part of himself..."

When Shiva started transmitting Yoga and expounding the nature of the existence to the Saptarishis or seven sages, a beautiful incident happened. One of the seven sages who later came to be known as Brighu Maharishi was an ardent devotee of Shiva. To this first Yoga program that was happening on the banks of Kanti Sarovar, the lake of Grace, Parvati was also a witness.

Brighu as usual came in the morning and he wanted to circumambulate Shiva. Parvati was sitting close by, but Brighu walked between them and circumambulated only Shiva. He wanted to do his Pradakshina only to Shiva, not Parvati.

Shiva was amused by this but Parvati was not amused. She did not like this. She looked at Shiva, Shiva said, “Move closer, he will go around you.” Parvati moved closer.

Parvati was very irritated by this. Then to please her, Shiva took Parvati and placed her upon his lap. Brighu converted himself into a tiny bird and went around just Shiva alone excluding Parvati.

By now Parvati was fuming, so Shiva pulled her into himself and made her a part of himself, that is one part of him became Parvati, another part of him remained Shiva. He became an Ardhanari.

Brighu saw this and converted himself into a bee and went around only the right leg. This childish devotion of Brighu was amusing, but at the same time, Shiva did not want Brighu to be lost in his devotion and miss the ultimate nature of the existence.

So he got into the Yogic posture of Siddhasana where there was no way for him to circumambulate his leg or any other part of his body. If he has to do it, he has to do it for both these principles of feminine and masculine.

What this story is conveying is that when we say Yoga, we are talking about a dimension which is all-inclusive. It is not an exercise or a process for creating health. It is about ultimate wellbeing of the human being in which you cannot exclude any aspect of life.

It is about attaining to a dimension beyond all dimensions. It is about a system to use your own existing system – your body, mind, emotion and energies – as a ladder to the divine. It is a method to make yourself into a stepping stone towards your ultimate nature.