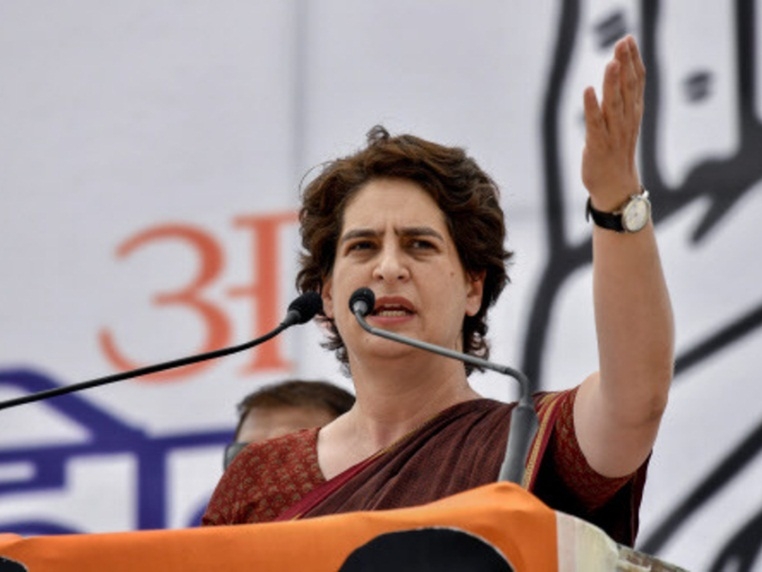 Congress leader Priyanka Gandhi Vadra, who was on her way to Uttar Pradesh Lakhimpur Kheri district to visit the kin of the victims there, has been arrested from Hargaon on Monday, claimed the party's youth wing national president Srinivas BV.

Priyanka Gandhi Vadra reached the Lucknow airport yesterday evening following the incident and was stopped by the police several times on her way to Lakhimpur Kheri.

Srinivas, in his tweet in Hindi, said, "Finally that happened, what was expected from BJP. In the democratic country of 'Mahatma Gandhi', the worshipers of 'Godse' have arrested our leader @priyankagandhi Ji who fought with heavy rains and police force to meet the 'Annadata', from Hargaon. This is just the beginning of the fight!! Kisan Ekta Zindabad".

In a video that he shared along with the tweet, Srinivas has called on all supports to reach the Sitapur police line.

Following several instances of being stopped on her way to Lakhimpur, Priyanka Gandhi had lashed out at the BJP-led Uttar Pradesh government and said, "I'm not committing any crime by deciding to meet victim's kin...Why are you stopping us? You should have a warrant...?"

Congress leaders who were accompanying Priyanka Gandhi Vadra created a ruckus and staged a dharna to protest against her arrest.

The Uttar Pradesh administration is stunned by your courage, Rahul Gandhi tweeted in support of sister Priyanka Gandhi Vadra.

"Priyanka, I know you won't back away - they are stunned by your courage. In this non-violent fight for justice, we will make the country's Annadata win," tweeted Rahul Gandhi in Hindi, adding the #NoFear.

UPCC president Ajay Kumar Lallu told IANS that the arrest of Priyanka proved again that there was no democracy left in the political system. "We are well within out rights to protest and we are not going to be cowed down by such repressive measures," he said.

Meanwhile, Bahujan Samaj Party MP Satish Chandra Mishra was not allowed to move out of his house in Lucknow at 3 am when he tried to move towards Lakhimpur Kheri. Mishra demanded a written order which prevents him from moving out of his house.

"We want to visit Lakhimpur Kheri. We are not being allowed to move citing law and order disturbance there. We demand written order if they want to house arrest us," the BSP general secretary told IANS.

BKU leader Rakesh Tikait's convoy was also stopped on its way to Lakhimpur Kheri. He had reached Puranpur in Pilibhit district. Tikait said that he will hold a press conference later in the day, reported IANS.

According to IANS, Bhim Army chief Chandra Shekhar Ravan's convoy was stopped near Khairabad in Sitapur and was detained at Sitapur police line. Aam Aadmi Party MP Sanjay Singh was stopped in Sitapur on his way to Lakhimpur Kheri on the intervening night of Sunday and Monday. He was stopped during checking of vehicles in Laharpur area of the district.

Meanwhile, mobile internet services were suspended in parts of the violence-hit district, where restrictions under CrPC section 144 -- which prohibits assembly of four or more people -- has also been imposed, according to officials.

The UP police took to Twitter early Monday to describe the incident as "unfortunate" and said eight casualties have been reported so far as per the district administration. "ADG LO, ACS Agriculture, IG Range & Commissioner are on the spot & situation is under control. Adequate deployment has been done to prevent any untoward incident," it added.

What happened in Lakhimpur Kheri?

Eight people were killed on Sunday as violence erupted during a farmers' protest, claiming the lives of both farmers and BJP workers ahead of a visit to Lakhimpur by Uttar Pradesh Deputy Chief Minister Keshav Prasad Maurya.

Two SUVs were set on fire by angry farmers in the clash near Banbirpur in Lakhimpur Kheri, the bloodiest incident of violence since the protest over the farm laws enacted at the Centre began last year.

Uttar Pradesh Chief Minister Yogi Adityanath expressed grief over the loss of life and said the state government will probe the incident, unmask the elements involved and take stringent action against the guilty.

Meanwhile, Samyukt Kisan Morcha (SKM) issued a statement regarding the incident claiming the death of four persons. SKM alleged that one of the four farmers was shot dead by Union Minister of State for Home Ajay Mishra Teni's son, while the others have been allegedly run over by the vehicles of his convoy in Uttar Pradesh's Lakhimpur Kheri district.

(With inputs from ANI, IANS and PTI)