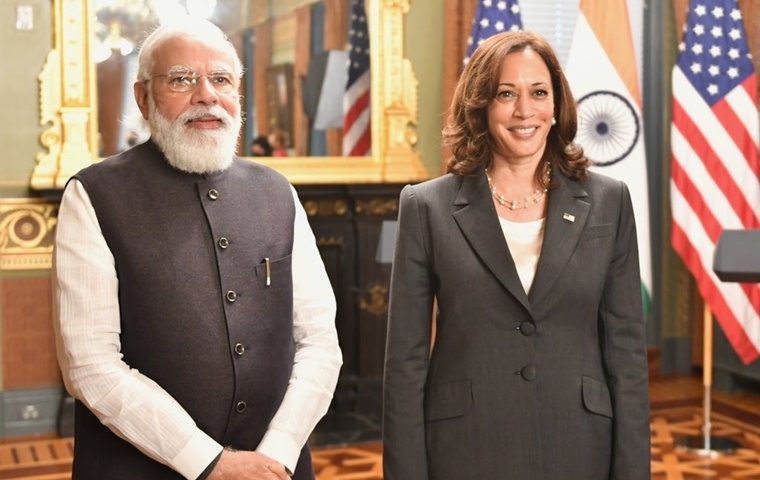 PM Modi held the meeting with Vice President Harris at the White House on Thursday during which they decided to further cement the Indo-US strategic partnership and discussed global issues of common interest, including threats to democracy, Afghanistan and the Indo-Pacific.

"In that context when the issue of terrorism came up. The Vice President suo moto referred to Pakistan's role in that regard. She said that there were terror groups working there. She asked Pakistan to take action so that these groups do not impact on US security and that of India," the news agency ANI quoted Foreign Secretary Harsh Vardhan Shringla as telling reporters during a special briefing.

Shringla apprised that Harris agreed with the Prime Minister's briefing on the fact of cross-border terrorism and the fact that India has been a victim of terrorism for several decades now.

"She agreed with Prime Minister's briefing on the fact of cross-border terrorism and the fact that India has been a victim of terrorism several decades now and the need to rein in and closely monitor Pakistan's support for such terror groups," he added.

Pakistan has been accused of providing overt and covert support to the Taliban. Early this month, US Secretary of State Antony Blinken noted that Pakistan has "harboured" members of the Taliban including the terrorists.

PM Modi held the meeting with VP Kamala Harris at the White House. The two leaders exchanged views on recent global developments, including in Afghanistan, and reaffirmed their commitment towards a free, open and inclusive Indo-Pacific region.

PM Modi, who is in the US for a three-day visit, met Harris earlier in the day. Shringla said that discussions between the two leaders were "substantive and they lasted over an hour".

"The meeting reflected warmth and cordiality. Discussions covered a number of areas which included COVID-19, climate change, the issue of terrorism, cooperation in the technology sector including cooperation in cyber security, space etc," Shringla said.

PM Modi on Thursday described India and America as "natural partners" as he held the first in-person meeting with Vice President Kamala Harris at the White House during which they decided to further cement the Indo-US strategic partnership and discussed global issues of common interest, including threats to democracy, Afghanistan and the Indo-Pacific.

This is the first meeting between the two leaders. Harris had earlier spoken with PM Modi over the phone in June during the COVID-19 crisis in India.

Later in tweet, PM Modi said, "Glad to have met @VP@KamalaHarris. Her feat has inspired the entire world. We talked about multiple subjects that will further cement the India-USA friendship, which is based on shared values and cultural linkages."

Their meeting came a day ahead of the maiden bilateral meeting between Modi and President Joe Biden and the Quad Leaders' Summit at the White House on Friday.