According to JD(U), the Chief Minister and the government's "report card" in these 15 years will be presented on all platforms.
ANI 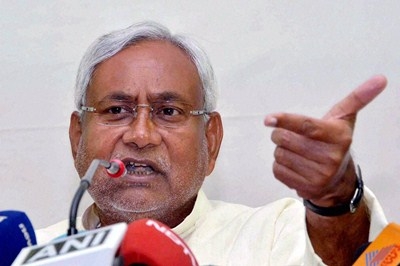 Janata Dal (United) will hold a celebration at 40 locations including Patna to celebrate the 15 years of governance of Chief Minister Nitish Kumar on November 24.

According to JD(U), the Chief Minister and the government's "report card" in these 15 years will be presented on all platforms.

For the seventh time, Nitish Kumar was sworn in as Chief Minister of Bihar in November 2020. He served as the Chief Minister of the state for a little over seven days in March 2000, after which he was elected in 2005 when he served a full term.

He was re-elected to power in November 2010, after which he served for four years before resigning, and had again taken oath as Chief Minister in February 2015. He was voted to power in the 2015 Assembly election as part of the 'Mahagathbandhan'.

However, after corruption allegations were levelled against his deputy Tejashwi Yadav in 2015, Nitish resigned only to be sworn in as Chief Minister merely 12 hours later joining hands with the BJP to form a government in the state.

In the 2020 assembly elections, the NDA has secured a 125-seat majority in the 243-seat strong Bihar Legislative Assembly, of which BJP won on 74 seats, JD(U) on 43 while eight seats were won by two other NDA constituents.

The RJD, on the other hand, emerged as the single-largest party with 75 seats while the Congress only won 19 of the 70 seats it had contested on. The LJP, which is part of the NDA at the Centre, could win only one seat in the assembly polls.

The only seat won by the LJP was Matihani, where Raj Kumar Singh defeated sitting JD(U) MLA Narendra Kumar Singh alias Bogo Singh by a razor-thin margin of 333 votes. From Anant Singh to Ritlal Yadav: Here's how Bahubali's of Bihar are faring this election