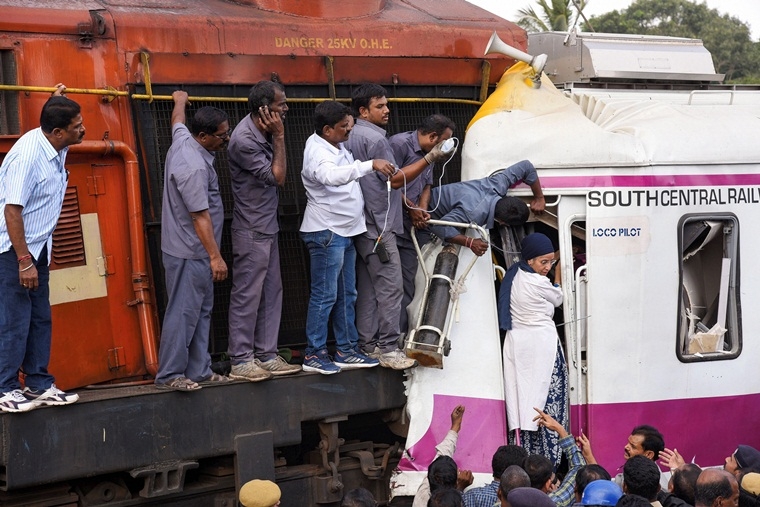 Hyderabad: Rescue officials trying to provide oxygen supply to the driver stuck inside the mangled portion of a train after a collision between Multi-Modal Transport System (MMTS) train with a passenger train between Kacheguda and Malakpet stations, in Hyderabad, Monday, Nov. 11, 2019. | (PTI Photo) The video shows the two trains moving towards each other on the same track, before ramming into each other. The impact of the collision was such that it lifted several bogies of the MMTS trains off the tracks. Later, passengers are seen running out of the derailed train after the accident.

According to the News Minute, though technical error in signalling system was initially believed to have caused the accident, South Central Railway officials later ruled out the possibility. They blamed human error for the collision, with preliminary investigation revealing it was the MMTS locopilot’s fault.

The driver of the MMTS train, who sustained serious injuries, was initially trapped in his cabin, which was badly mangled, but was rescued after a couple of hours. Oxygen and other life-saving medical aid were provided to him during the operation, they said adding he has suffered severe leg injuries. He was rushed to a private hospital, where his condition is stated to be stable.

Several train services were cancelled either fully or partially due to the incident. Railways said that it had taken the accident very seriously and Member (Traction), Additional Member (Signal & Telecom) and Executive Director, Safety, Railway Board will visit the site.

A high-level inquiry at the level of Commissioner, Railway Safety, South Central circle, has been ordered to investigate into the reasons for the incident, a railway release said. Union Minister of State for Home G Kishan Reddy visited the spot and made enquiries with the officials. The Railway Ministry has announced ex-gratia of Rs 5,000 each to passengers with minor injuries and Rs 25,000 each to passengers having grievous injuries.