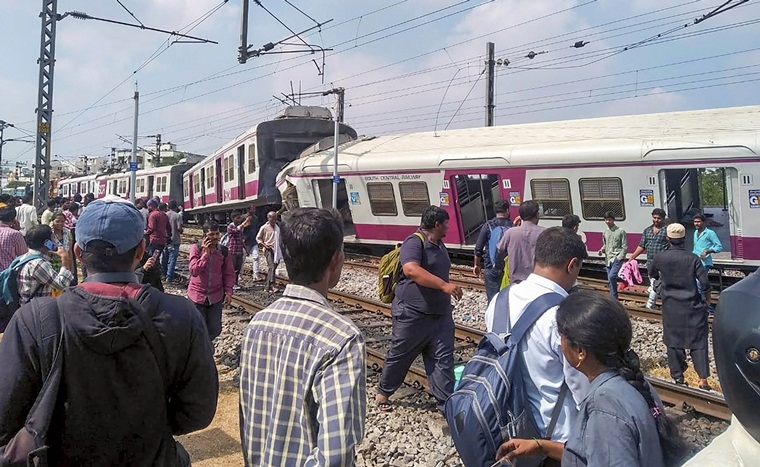 Hyderabad: Onlookers gather at the accident site where a Multi-Modal Transport System (MMTS) train collided with a passenger train between Kacheguda and Malakpet stations, in Hyderabad, Monday, Nov. 11, 2019. | (PTI Photo)

Two slow-moving trains collided at Kacheguda Railway station here on Monday, leaving 16 people injured, including a driver who was trapped in his badly mangled cabin for eight hours. The CCTV footage of the collision between Lingampalli-Falaknuma train & Kurnool City-Secunderabad Hundry Express at Kacheguda railway station is now doing rounds on social media.

The video shows the two trains moving towards each other on the same track, before ramming into each other. The impact of the collision was such that it lifted several bogies of the MMTS trains off the tracks. Later, passengers are seen running out of the derailed train after the accident.

CCTV footage of the Mmts train collision in Kachiguda. pic.twitter.com/IMLO9Di53U

The Lingampalli-Falaknuma multi-modal transport system (MMTS) apparently overshot the signal and collided with the Kurnool-Secunderabad Hundry Intercity Express (17028) at 10.41 am, South Central Railway officials said. The driver of the MMTS train, who sustained serious injuries, was initially trapped in his cabin, which was badly mangled, but was rescued after a couple of hours.