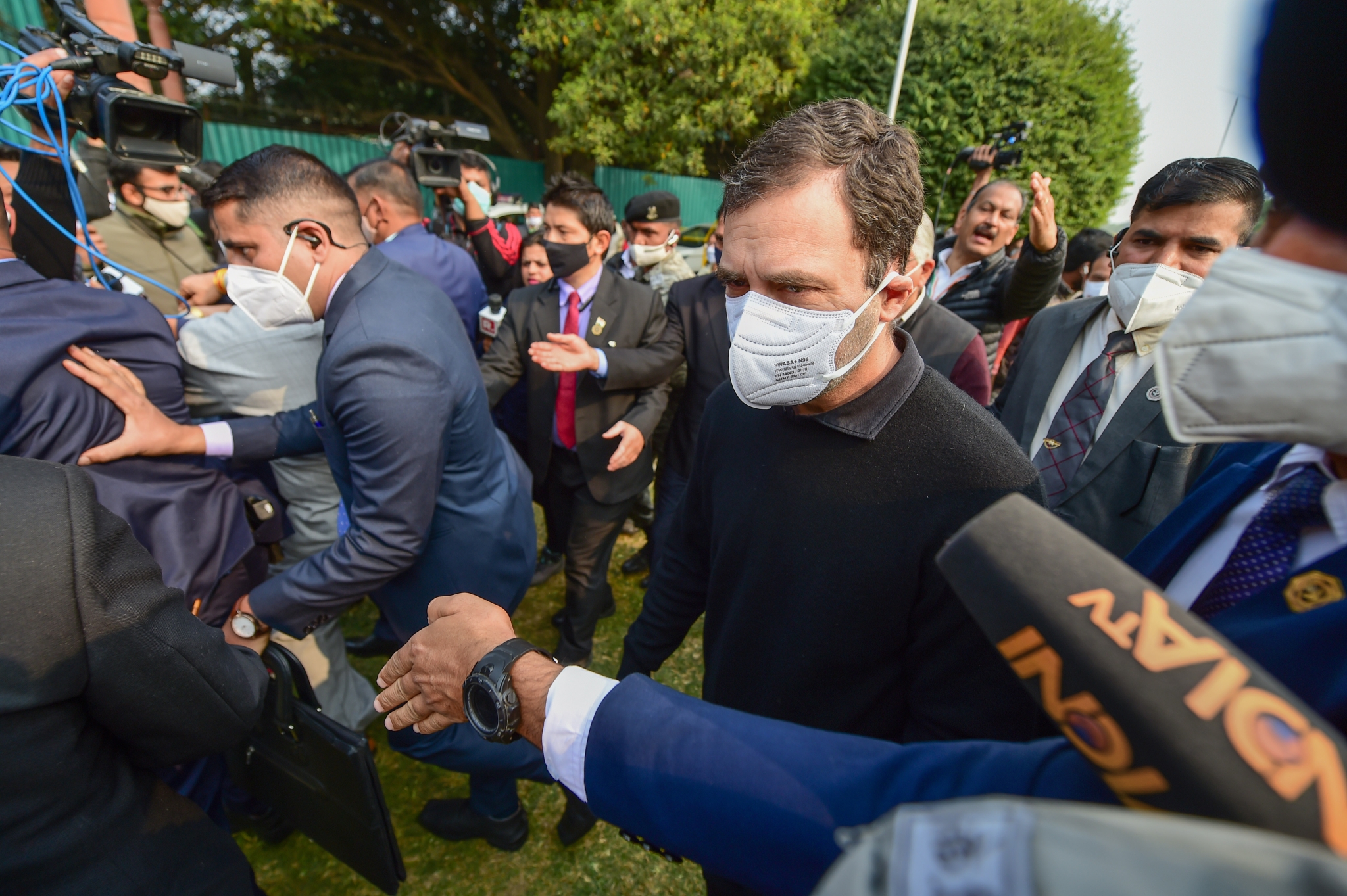 Congress leader Rahul Gandhi on Tuesday attacked media when asked about the recent lynching incidents in Punjab following sacrilege bids at the Golden Temple in Amritsar.

Opposition leaders on Tuesday took out a protest march here demanding that action be taken against Union Minister Ajay Mishra in the Lakhimpur Kheri violence case, with Congress leader Rahul Gandhi saying they will not rest till the minister is sent to jail.

Leaders of several opposition parties took out the march from Gandhi statue inside Parliament complex to Vijay Chowk demanding that the minister, whose son has been arrested in the Lakhimpur violence case, be immediately sacked.

Talking to reporters at Vijay Chowk, Gandhi said the entire opposition was united in raising its demand for the sacking of Minister Mishra.

Referring to the SIT report on the violence, Gandhi said a report has come out that it was a conspiracy and not an isolated incident.

"We will not spare him (Ajay Mishra) and continue our struggle till he is sent to jail," Gandhi told reporters.

"The prime minister has not done anything on this. Neither the government nor the media is doing its job," he charged. He told the media person, "Sarkar ki dalaali mat kijiye. Issue ko divert mat karo.", when he was questioned about Punjab lynching.

"The prime minister on the one hand apologises to farmers, but on the other hand he keeps the minister who is involved in Lakhimpur Kheri incident in his cabinet. We will not accept what is being done against farmers," Gandhi said.

This is the second time in the last few days that Gandhi lashed out at media for asking questions. A day ago during his address to the media, the Wayand MP snapped at a journalist. In the viral video, he could be heard saying, “Aap sarkar ke liye kaam karte hain? (Do you work for the government?)"

Meanwhile, leaders also demanded that the suspension of their 12 MPs be immediately revoked. MPs of various parties raised slogans against the government and held placards and banners demanding the immediate sacking of the minister.

Opposition leaders said they will continue to raise the demand even if many more of their MPs are suspended.

Earlier in the morning, leaders of several opposition parties met in the chamber of Leader of Opposition in the Rajya Sabha Mallikarjun Kharge and discussed their further strategy.

Opposition parties have been protesting against the suspension of MPs, which they have termed as undemocratic and against the rules of the House.

Proceedings of the Rajya Sabha have been disrupted repeatedly on the matter. Eight people, including four farmers, were killed in the Lakhimpur violence on October 3.

"I have given a suspension of business/notice under Rule 267 to discuss the recent SIT report on the manslaughter of Lakhimpur. We demand that MoS Ajay Mishra be immediately removed from his position to ensure a free and fair trial," Kharge said on Twitter.

"In order to ensure a free and fair trial of the murder case of innocent farmers, the Mos, who is father of the accused, must immediately be removed from his position," Kharge said in his adjournment notice under Rule 267.

The notices were, however, disallowed by Chairman M Venkaiah Naidu. Lynching was unheard of before 2014: Rahul Gandhi charges at PM Modi
Advertisement