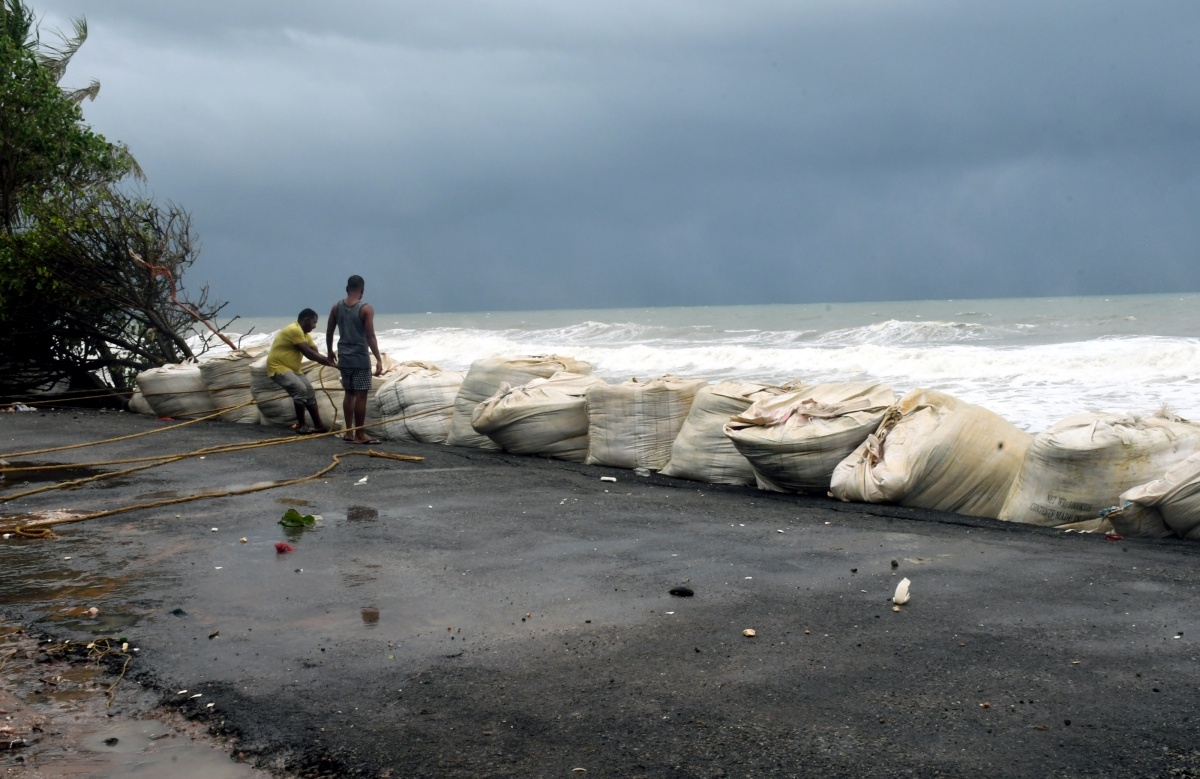 Residents try to shut the gap with sandbags at a damaged road following the Coastal erosion and strong wind due to the formation of Cyclone Taukta in the Arabian Sea in Thiruvananthapuram on Saturday. | ANI

Amid reports of cyclonic built up in the Arabian Sea, the Indian Coast Guard on Wednesday raised warnings for fishermen to return to harbour. Within a week another cyclone is brewing but it may not directly affect India’s coast. However, the Coast Guard Headquarters at Porbandar, Okha and stations in Gujarat has been put on high alert and on standby as the Indian Meteorological Department (IMD) warned that Cyclone Gulab could re-intensify as Cyclone Shaheen in the next 24-hours.

In a video released on social media, The Indian Coast Guard officer can be seen announcing and advising the fisherman at sea to return to harbour. "The message was also relayed through a shore-based radar system to those deep into the sea," PRO Defence Gujarat tweeted.

"The remnant of the cyclonic storm Gulab lay as a well-marked low-pressure area over south Gujarat region and adjoining Gulf of Khambhat. It is very likely to move west northwestwards, emerge into the northeast Arabian sea and intensify into a depression by tomorrow," IMD said in its latest cyclone bulletin on Wednesday.

ICG DHQs at Porbandar, Okha & all CG Stns in #Gujarat on high alert & on standby pic.twitter.com/YbxekLILTN

This will be the second cyclone after Tauktae to develop in the basin of the Arabian Sea this year. The remnants of Cyclone Gulab moved across Telangana, Maharashtra and now lay over Gujarat. According to IMD, Gulab’s trail lay as a well-marked low pressure over south Gujarat as on Wednesday morning.

The weather agency added that the depression is very likely to move further west-northwestwards and intensify into a cyclonic storm during the next 24 hours. The IMD maintained that the Sea surface temperature in the Arabian sea is about 28-30 degrees celsius, which is ripe for cyclonic formation.

K S Hosalikar, a senior scientist at IMD Mumbai, said, “The remnants of Gulab cyclone will continue to have its impact on Marathwada, Madhya Maharashtra, Konkan with few places receiving extremely heavy rainfall. The northern parts of Konkan and Madhya Maharashtra will receive more showers on Wednesday as well."